The Jesse-Hugo-Cindy Circle is Now Complete

“I believe it is time that we take up with courage and clarity a political, social, collective and ideological offensive across the world — a real offensive that permits us to move progressively, over the next years, the next decades, leaving behind the perverse, destructive, destroyer, capitalist model and go forward in constructing the socialist model to avoid barbarism and beyond that the annihilation of life on this planet.”

And, with todays Protest in Argentina the Circle is Complete… 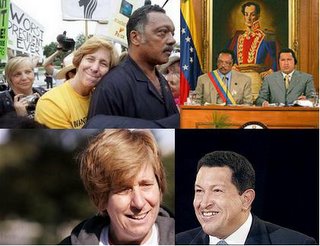 United States civil rights leader, the Reverend Jesse Jackson has rejected US State Department allegations that Venezuelan President Hugo Chavez is “a threat to regional stability” and called on the Bush administration to tone down the anti-Chavez rhetoric and make some effort towards resolve apparent differences.

I do hope the transcript for this rally is made available. Another Pro-Chavez, Pro-Palestinian, Anti-Israeli protester just left the stage. For the media to say that this is an Anti-War Rally is quite a stretch. Now they are chanting, “End the Occupation!” It is Huge Anti-American Leftist Rally! The media should be sued for misrepresentation. This is MUCH MORE than an Anti-War Rally!…

“We’re going to say ‘No to Bush’ and ‘No to FTAA,'” said Argentine labor leader Juan Gonzalez. “We don’t have any confidence in anything he might propose here. Whatever it is will only prolong hunger, poverty and death in Latin America.”

Chavez has said he would use the meeting as a stage to denounce the U.S. as a “capitalist, imperialist model” of democracy that exploits the economies of developing nations.

And, with today’s protest, the Jesse-Hugo-Cindy Circle is now complete!