On the 9th consecutive night of rioting, the transformation of Paris from Western Capital to militant battleground of an oppressed population is nearing completion. In the country’s worst urban violence in a decade, marauding youths torched nearly 900 vehicles, stoned paramedics and burned a nursery school in a ninth night of violence that spread from Paris suburbs to towns around France. 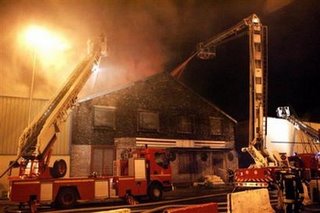 Firefighters try to put out a fire in a carpets warehouse in Aubervilliers, north of Paris, early Saturday, Nov. 5, 2005 on the ninth day of unrest. Vehicles and buildings were torched by youths in largely immigrant areas. (AP)

“Many residents say repressive policing has heightened a sense of injustice, with officers systematically stopping and searching young blacks and North Africans in particular, our correspondent says.”
(BBC)

“The unrest cast a cloud over the end of Ramadan, the Muslim holy month. In Clichy-sous-Bois — heart of the rioting — men filled the Bilal mosque for evening prayers, but streets were subdued with shops shutting early.”
(AP) 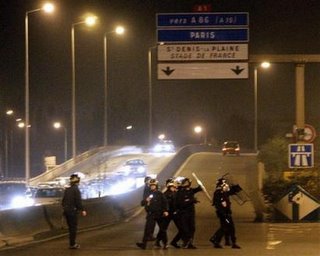 “The violence reflects tensions in French ghettos marked by youth unemployment of more than 30 percent, poverty and large immigrant Muslim communities in the majority Catholic nation. De Villepin yesterday vowed before the Senate that authorities “will not give in” to the violence and will make restoring order the government’s top priority. “I will not allow organized gangs to lay down the law in the suburbs,” he said.
(Bloomberg) 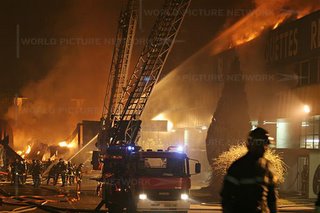 “Although some complain that their voices are never heard, as we tried to speak to local residents, we were told at one point to leave the area or risk being attacked.”
(BBC)

“Religious leaders will lend their support to government efforts to cool tensions with Catholic, Protestant and Muslim leaders planning a silent march on Saturday in Aulnay-sous-Bois, one of the violence-hit suburbs.”
(Reuters)

Initial reports were released on the investigation of the deaths of two boys who were electrocuted as they fled police. Their deaths started the 9 days of rioting:

The Interior Ministry released a preliminary report Thursday exonerating officers of any direct role in the teenagers’ deaths. Some 1,300 officers were being deployed in Seine-Saint-Denis, a tough northeastern area that includes the town of Clichy-sous-Bois and has seen the worst violence.

The report said police went to Clichy-sous-Bois to investigate a suspected intrusion on a building site but did not chase the teenagers who were killed. A third teenager who was seriously injured also told investigators he and the other boys were aware of the dangers when they hid in the substation, which was fenced off, the report said. 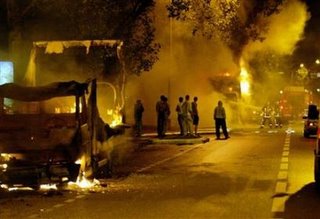 A gang of local youths watch as Firemen extinguish burning vehicles during clashes between riot police and French youths in the Paris suburb of Aulnay sur Bois, early November 3, 2005. (Reuters)

The violence is spreading outside of Paris!

Marauding youths set fire to cars, warehouses and a nursery school and pelted rescuers with rocks early Saturday, as the worst rioting in a decade spread from Paris to other French cities.

Rioters burned more than 500 vehicles Friday as the unrest grew beyond the French capital for the first time.

Geopolitical Review has a comprehensive map of the trouble spots in Paris.
Roger L.Simon notes that the New York Times is putting the blame on Sarkozy. Ludicrous!
Outside the Beltway describes the growing violence.
Captain’s Quarters says that the pent up violence finally broke loose across France.
The American Thinker believes France needs Jesse and Al!
Daily Pundit says “Raise the Entitlements!”