HARRY REID SAYS THE BUSH ADMINISTRATION SHOULD NOT PLAY POLITICS WITH OUR TROOPS!
VIDEO HERE

To clarify things for the American people, Republicans have generously decided to air television ads of Democrats explaining their position on the war,… or quite possibly, the variety of positions that certain Democrats have held on the war! 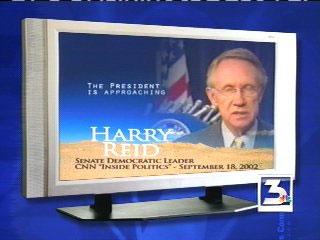 In Nevada the ad will focus on Senator Harry Reid. The ad accuses the Nevada Senator of flip-flopping, using his own words against him!… And, the Senator is not happy about it, accusing the Republicans of playing politics with his own words!

The ad zeroes in on Reid and even tells viewers to call his office and quit playing partisan politics! (Senator Reid’s office phone number is 202-224-3542 in Washington)

The Senator had the following response to the ads coming out this weekend and playing in Nevada:

“These negative ads do nothing to get the job done in Iraq. Instead of giving our troops a plan for success or answering the serious questions of the American people, the Administration has decided to start up its political attack machine.”

Senator Reid says he’s disappointed in Republicans, but he won’t stop working with them to find real solutions in Iraq.

Republicans said there were more ads to come out down the road.

Senator Reid has the following posted on his website:

“The President and Vice President shamelessly decided to play politics.”

“It seems the President and Vice President have decided to treat the war likes it’s a political campaign.”

“The deceiving, dividing and distorting must end. Of course, this is the same move we’ve seen from Karl Rove and Dick Cheney time and again over the last five years.”

“This time stakes are too high to let them get away with it. There’s more than poll numbers or votes at stake.”

“President Bush, Vice President Cheney and Karl Rove must stop the orchestrated attack campaign they launched on Veterans Day. It’s a weak, spineless display of politics at a time of war.

“It’s easy to attack, Mr. President. The hard part is leading, coming clean with the American people and giving our troops a strategy for success.”

Meanwhile, Rush Limbaugh is not impressed with the liberal “hawk” Murtha and called him the “useful idiot for the momtent.” The left is upset about this.