The Polish Conservative Government released on Friday Soviet plans for a European nuclear attack that would have resulted in an estimated two million deaths in Poland. 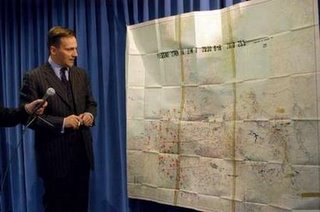 Poland’s Defense Minister Radoslaw Sikorski holds a news conference in Warsaw November 25, 2005. Poland on Friday opened up secret files of the former Warsaw Pact which confirmed that the Soviet-led military alliance was ready to accept Europe’s annihilation with nuclear strikes as part of a war with NATO. Sikorski said he was handing over about 700 files which have until now been kept secret to the National Remembrance Institute, where they will be studied by historians. A map in one file shows Soviet and East European troop movements and the targets of nuclear strikes during a possible war between the Warsaw Pact and NATO. (REUTERS/Forum/T.Paczos)

The new conservative government in Warsaw wants Poland to deal more firmly with its communist past, and Friday’s opening of military files shows it is prepared to incur Moscow’s wrath and confront those Poles who worked closely with the Soviet Union.

Sikorski published a map showing Soviet bloc forces planning a “counter-attack” against NATO forces, in which the Soviets would have dropped nuclear bombs along a line from the Dutch coast to Strasbourg, wiping out cities in Belgium, the Netherlands and Germany.

But the 1979 exercise also showed that Warsaw Pact planners believed such a conflict would have seen NATO target its nuclear bombs along the line of the Vistula river in Poland, to prevent Russian reinforcements reaching the front.

“The Polish army was being asked to take part in an invasion which could have resulted in a nuclear violation of our country,” Sikorsky said. “Poland is a country which would have been bombed out of existence.” He claimed two million Poles would have died in any conflict.

The military files handed over to Poland’s Institute of National Remembrance also included details of the 1968 Warsaw Pact invasion of Czechoslovakia to crush the “Prague Spring”.