Opposition Strikes Back in Venezuela

At least one person is dead at a student protest tonight! 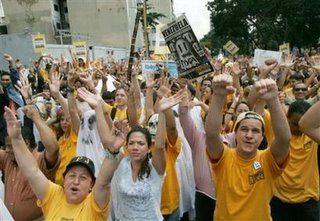 The Opposition parties in Venezuela may have stopped Hugo Chavez from gaining absolute control over Venezuela just yet. The parties banded together and declared that they would not take part in the elections on December 4th.

Venezuela’s main opposition party on Tuesday pulled out of next week’s legislative vote after accusing election officials of favoring President Hugo Chavez and failing to guarantee a fair ballot.

The withdrawal of the center-left Democratic Action, the second largest party in Venezuela’s 165-seat National Assembly with 23 seats, could lower voter turnout and allow pro-Chavez lawmakers to strengthen their hold over the parliament.

“Under these circumstances, we cannot participate in the electoral process,” Democratic Action Secretary-General Henry Ramos told reporters. “We propose the suspension of the process next Sunday. We cannot go on like this.”

Ramos repeated opposition charges that most of the National Electoral Council directors were in the service of the government and had concealed fraud in the electoral register and in the electronic voting system.

Electoral authorities said this week they would remove fingerprint machines at polling stations after opposition leaders said they threatened voter confidentiality. But the concession has failed to convince some opposition parties.

A. M. Mora y Leon at Publius Pundit is all over the Venezuelan election. Just earlier today he said that this would be the final nail in the coffin of the Venezuelan opposition as dictator Hugo Chavez consolidates power and installs a Marxist regime. But, now? 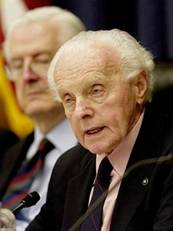 Representatives Tom Lantos (D-CA), right, and Henry Hyde (R-IL) are seen in Washington, November 17, 2004. A group of congressmen, including Lantos and Hyde, was forced to abandon an official visit to Venezuela on Monday after local authorities refused to allow them to leave their aircraft in Caracas, U.S. officials said. (Mannie Garcia/Reuters)

V-Crisis has more on the latest blow to diplomatic relations.

The US is now reporting (Tuesday PM) that Caracas has apologized, but Caracas denies the claim.

A. M. Mora y Leon and Aleksander Boyd are now reporting that riots are breaking out in Venezuela tonight.

Maybe it is just as well that the Representatives decided not to stay!

On Monday the Chavez Government signed a huge arms deal with Spain. (and slammed the U.S.)