Paris police call the latest night of violence “harassment” as a police garage and two police cars are torched, molotov cocktails are thrown, tear gas is shot off, and 11 cars total are torched in Clichy rioting!

…And, the violence is spreading! 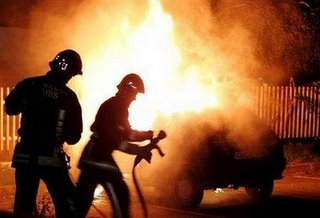 Firemen try to extinguish a car set which was set on fire during the fifth night of riot in the Paris suburb city of Clichy-sous-Bois, November 1, 2005. (AFP)

Police described the latest trouble as “harassment” by small groups, rather than the rioting seen last week.

In the most serious incident a police garage was set ablaze and two police cars were destroyed in Montfermeil.

The unrest was sparked by the death of two boys whom locals think were fleeing police, despite official denials.

France’s Interior Minister Nicolas Sarkozy promised to step up security in the troubled areas and some 400 police officers are now deployed in Clichy-sous-Bois.

He met senior officers there on Monday, but the boys’ parents refused to meet him.

Police fired more tear gas overnight to disperse youths confronting them near a mosque in Clichy – the latest focus of concern after a tear gas canister was hurled inside.

Police also reported sporadic stone-throwing and torching of cars by youths in Sevran, Neuilly-sur-Marne and Bondy, describing it as copycat violence.

The violence has spread to Sevran, Neuilly-sur-Marne and Bondy areas of Paris where cars have been torched. 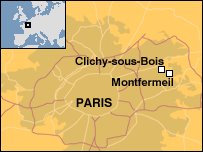 Officials said yesterday that violence had spread to nearby towns but mayhem in the troubled northeastern suburb of Clichy-sous-Bois was less than previous nights.

At least 12 people were arrested in the town, which has a large Muslim community, on a night when a Molotov cocktail was thrown at a police station and 11 cars were torched.

Tensions have run high between police and youth gangs since the accidental electrocution deaths on Thursday of two teenagers, who died after scaling an electrical relay station wall.