From the headlines at the WaPo, CBS, ABC, etc. you may be fooled about the historic meeting that took place this weekend in Manama, Bahrain.

This was the second year that representatives from Middle Eastern countries met to build commitment to democracy in the historically troubled region. Since the countries first met last year there have been tremendous moves towards democracy and human rights in the region, including:

Surely, there is work to be done, but…
has the Mideast ever had a year like this past one? 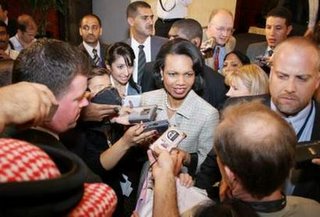 U.S. Secretary of State Condoleezza Rice (C) speaks to journalists at the Future Forum in Bahraini’s capital city Manama November 12, 2005. Foreign ministers and delegates from 46 countries including the United States and United Kingdom attended the forum which is held for the second time. (REUTERS/Hamad I Mohammed.)

Condolezza Rice spoke to foreign ministers and Mideast representatives during the Opening Session of the Forum for the Future today in Manama, Bahrain. Condoleezza pushed for more reform in the region that has already had a year full of historic democratic moments:

A year and a half ago, at the G-8 Summit in Sea Island, the worldÂs leading industrial nations pledged to support courageous men and women across the Broader Middle East and North Africa, who are demanding economic freedom, and democratic rights, and educational opportunity.

President Bush and his fellow heads of state heard the calls for change that are redefining this region. And to amplify these voices, they partnered with the governments of the Broader Middle East and members of civil society — and created the Forum for the Future.

The Forum held its first meeting last year in Rabat. And since then, the entire world has witnessed a tremendous expansion of liberty in the Broader Middle East.

The long-suffering people of Iraq and Afghanistan have held unprecedented democratic elections — not once but twice.

The Palestinian people have elected a leader who openly calls for peace with Israel. And if we can make progress on the roadmap, the establishment of a Palestinian state should be within our sites.

For the first time, Egypt’s presidential election was a multiparty competition. Kuwaiti women have gained the right to vote. And one million citizens in Lebanon have demanded and won their independence from Syrian domination.

We have all seen that the human longing for justice is a force that is not easily denied.

And we continue to support the peoples of Syria in their aspirations for liberty, democracy, and justice. We would like to see an end to the arbitrary detentions of democratic and human rights activists there — including Kamal Labwani and all the prisoners of conscience from the Damascus Spring.

Ladies and Gentlemen, we have worked too hard and come too far as partners to rest content with these initial gains. The goals of democracy are not realized with one demonstration or a single election.

This year the media spin is putting a stain on the Democracy Summit. 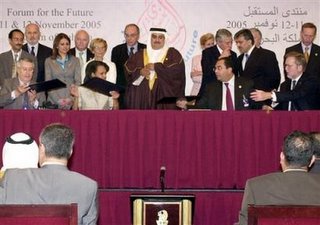 Seated from left to right, Moroccan Foreign Minister Mohamed bin Isa, U.S. Secretary of State Condoleezza Rice, Egyptian Ambassador to Bahrain Azmi Khalifa and Danish Foreign Minister Per Stig Moeller exchange papers during a signing ceremony Saturday, Nov. 12, 2005, in Manama, Bahrain, as they are viewed by other ministers and delegates, including Bahraini Foreign Minister Khalid bin Ahmed, standing center in Arabic dress. The delegates were signing a memo of understanding on promoting democracy in the Middle East. (AP Photo/Hasan Jamali)

Aljazeera’s report on the conference was no more biased than the US media reports. You have to read down in the document to grasp the accomplishments of this conference:

Last year’s inaugural forum meeting, in which the Group of Eight industrialized nations joined Middle East and North African states, pitted US calls for reform against Arab demands to solve the Israeli-Palestinian conflict as a first step to tackle terrorism.

Promoting democracy and reform across the Middle East is a focal point of US foreign policy. Many Arab nations,however, view it with suspicion.

Arab leaders have stressed the US should not try to impose its own form of democracy on the Middle East.

Looking through the AP’s lens calling the conference a “blow to Bush” you would think that the Mideast ought to be a coalition of free and democratic countries by this time. But, the fact that these countries would gather at all for a second year of historic meetings knowing that the US would push more reform on the region is remarkable in itself.

U.S. Secretary of State Condoleezza Rice also used the conference to send a message to Syrians chafing under authoritarian rule, saying Washington backs their “aspirations for liberty, democracy and justice under the rule of law.”

Bush hosted a coming-out party for the Forum for the Future last year at Sea Island, Ga., and the U.S. is putting up half of the $100 million in a venture capital fund for economic development launched at this year’s gathering.

The White House had hoped the conference would showcase political progress in a part of the world long dominated by monarchies and single-party rule, and spread goodwill for the U.S.

By the results from this past year, it looks as if this is happening.

Syria Comment PLUS has more on the Bush Administration talking tough with Assad.

After worries in the Middle East that Washington would impose its will on them, US officials responded:

US officials attendi
ng a two-day “Forum for the Future” conference in Manama yesterday rushed to assure Middle Eastern nations that Washington does not intend to enforce controversial democratic changes in the region.

“Democracy is not imposed, dictatorship is,” US Assistant Secretary of State Daniel Fried told a press conference.