Massive Protest Outside Congress for Democracy in Ethiopia

The biggest Ethiopian protest march ever in Washington DC to condemn the massacre of Ethiopians back home by the Meles regime was held on Tuesday. The march started at 7 AM in front of the US Congress.

Ethiopians want the US to put pressure on the Meles Regime in the aftermath of an election that many thought was stolen by the ruling regime. 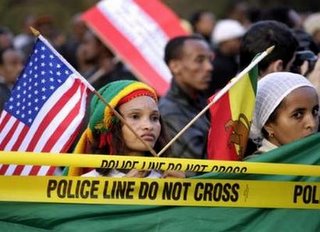 Ethiopian Americans protest outside the White House in Washington November 15, 2005. The protesters demonstrated against Ethiopian Prime Minister Meles Zenawi and demanded that the U.S. step up its efforts to end post-election violence in Ethiopia. (REUTERS/Yuri Gripas)

The Ethiopian protesters may be frustrated but they are not giving up! 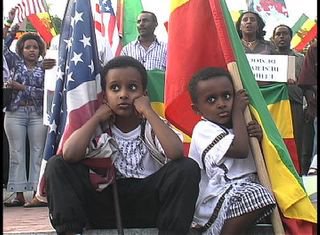 Ethiopians rallied in Washington D.C. on Tuesday to protest against the brutal Meles regime.

On Monday, pro democracy protesters chased away some 20 Meles supporters in Washington DC before they could voice their opposition to Voice of America broadcasting:

Today’s (Monday, 11-14) demonstration against the VOA that was organized by the EPRDF agents in Washington DC was a total public relation disaster for the Meles regime. The 20 protestors, some of whom embassy employees and security guards, were chased away by over 400 patriotic Ethiopians who expressed support for VOA and condemned the mass murder of civilians by the Meles regime. After trying to utter some anti-VOA slogans from far away, the 20 EPRDF mercenaries gave up and dispersed… ER Nov 14 2005

Several thousand rallied at the steps of Congress today to protest the Meles government in Ethiopia:

Organizers said there were 20,000 people from across the United States and Canada at the rally on Tuesday, the latest in a series against Zenawi.

Demonstrators heard speeches on the steps of the US Congress building before marching to the State Department, singing songs and carrying banners with slogans such as “USA Condemn the Brutal Regime in Ethiopia”.

Bekalu Ayalew, of the Ethiopian People’s Revolutionary Party, a coalition of Ethiopian groups in the United States, said “we want the US government to withdraw its support for the dictator”.

Several Ethiopians were gunned down during demontrations following the May election:

Bekalu Ayalew, of the Ethiopian People’s Revolutionary Party, a coalition of Ethiopian groups in the United States, said “we want the US government to withdraw its support for the dictator”.

Violence in Ethiopia was sparked by elections in May, which the opposition claims were fraudulently won by Meles’s ruling party.

The protesters hope to draw attention to the plight of Ethiopians under the Meles regime and to push Ethiopia towards a democratic government.

Update: (Wednesday, 11-16-05 PM) Ethiomedia is reporting that their unofficial estimates say as many as 50,000 Ethipians showed up in Washington DC to protest.

The Meles Government gunned down 21 people yesterday including a mother and her two-year old child:

The Meles regime gunned down 21 people, including a mother and her 2-year old child, in the city of Kabridehar yesterday. The massacre occurred when the people of Kabridehar, eastern Ethiopia, went out in the streets to protest the arrest of community and opposition party leaders. According to the protestors, the prisoners are being held without food and medical treatment.

And, The US Congress is requesting President Bush on Ethiopia.