PROTESTERS IN NEW ORLEANS RE-ENACTED THEIR ATTEMPT TO FLEE NEW ORLEANS THREE DAYS AFTER HURRICANE KATRINA, BUT WERE AT THAT TIME TURNED BACK BY THE LOCAL POLICE,
VIDEO HERE

In the days after the deadly storm, residents who could not escape the city and took shelter inside the convention center were told to evacuate by the bridge. But after a 2.5 mile walk in sweltering heat across the bridge they were turned back by armed police from Gretna. (AP) 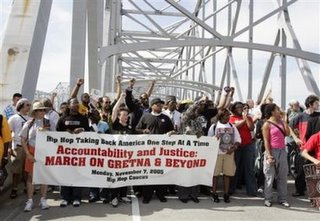 Protesters rally near the center of the bridge across the Mississippi River Monday, Nov. 7, 2005 in New Orleans as repeat of their attempted exodus of Hurricane Katrina several weeks ago. The protesters marched across the bridge without being arrested by the police but were escorted by the police. About 50 protesters walk across the bridge over the Mississippi River under police escort, recreating the thwarted exodus of Hurricane Katrina refugees in New Orleans, La., Monday, Nov. 7, 2005. (AP Photo/James A. Finley)

The marchers were protesting the treatment of the Gretna Louisiana Police who refused to let evacuees enter three days after Hurricane Katrina struck the city. The protesters say it was an act of racism:

The demonstrators, including Rep. Cynthia A. McKinney (D-Ga.) and several civil rights activists, said their aim was to ensure that such an injustice would not be ignored.

“This is a matter of human rights and civil rights,” McKinney said. “We want the people who want a better America to take a stand, and stand with us.”

Three days after Katrina battered New Orleans and the city had flooded, officials told residents who had taken refuge at the convention center and other shelters to evacuate across a bridge to the city’s West Bank.

But after a 2.5-mile walk in sweltering heat, the mostly black evacuees were turned back by armed police from Gretna — a predominately white, blue-collar city in Jefferson Parish.

The Mississippi River bridge is a nonpedestrian toll crossing that connects Gretna to New Orleans.

“It was racism, and we have to call it that,” said Malik Rahim, a West Bank resident who said he witnessed the bridge incident.

Activists said the march was the first in a series of civil actions aimed at ensuring the rights and dignity of New Orleans residents, many of whom are homeless and unemployed.

So, as a refresher, while the Red Cross was being kept out of New Orleans (by Governor Blanco), refugees were being kept in (by the Gretna police).

Yet, this was all the fault of President George W. Bush, because he doesn’t care about black people? Right?

Instapundit had reported on this incident at the time and noted that the the local officials were blamed back then. There were many questions about this incident as Instapundit noted on another posting but if the police in Gretna were able to hear the liberal media reports “black-washing” the made up atrocities in the city, it is no wonder they would shoot off their guns to warn people not to attempt to get in their “bedroom community”.

I wonder why this protest didn’t get more attention? Hmm…

** The latest News Release (November 9, 2005) for Katrina Victims shows the Hurricane had no preference for race! **