** The most repulsive Made-for TV or Internet Ad since Bush-Hitler! **

Similar to images from their new advertisement on television, “Truth Out” carries pictures of fallen American soldiers (like the one from their site below) and puts out press releases attacking the Bush Administration as its director, Paul Rieckhoff, fills in for six hours on embattled Leftist Air America radio… 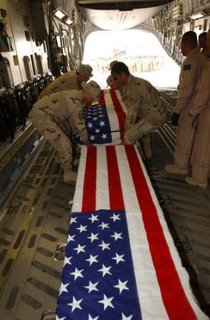 “Operation Truth” the Leftist Veterans Organization this week released the most vulgar advertisement to date on the Iraq War. During the advertisement scenes of American military casualties are spotlighted as they are being transported back to the States. In the background a voice asserts that “there is no plan” and “how many must die?”… The leftist ad pushes for early withdrawal from Iraq while not caring about the soldiers in the field or the infant democracy of Iraq.

For a total of six hours, Paul and co-host Anthony Lappe, of Guerilla News Network, covered a range of topics related to the wars in Iraq and Afghanistan and the issues that face our Troops and Veterans. On the first night, Anthony reported live from New Orleans about the devastation and the role of National Guard Troops in the clean-up and recovery efforts. On night two, Paul and Anthony spoke with a great group of guests, including a fiery interview with former Navy SEAL and Minnesota Governor Jesse Ventura (who is also an OpTruth advisor), as well as former Georgia Senator and Vietnam Veteran Max Cleland about his views on the Iraq War. They also took phone calls from Veterans across the nation.

“Truth Out” is endorsed by MoveOn.org another Leftist organization (remember their famous ad of the “Sinking Soldier” ?… or “Bush-Hitler”?). The current MoveOn Campaign urges members to write their local papers emphasizing:

Letter to the Editor: White House Indictment Was About Cover-Up Of Iraq Lies

Unhinged Democratic Senators, not quite satisfied with the findings from the CIA Leak Probe, forced a closed session of the Senate to pressure the Republican majority into completing an investigation of the intelligence underpinning the 2003 invasion of Iraq (the Leftist blogs loved this extreme measure).

Also this week,proven liar and extreme leftist, retired Ambassador and blowhard, Joseph Wilson, was propped up as a hero as he made the rounds on the MSM.

If the Democrats want to have a big debate on the war and pre-war intelligence, I say bring it on. And while we are at it, let’s remind them of all the Clinton administration statements about WMD in Iraq, and the ones from John Kerry, and the U.N., and France and Germany.

And let’s not stop there, let’s put some pressure on the media to ask Joe Wilson about the lies he was caught in by the bipartisan 9/11 Commission and the Senate Intelligence Committee. Bring it on. We have the high ground on this issue if we can get the facts past the media filter. The 60 Minutes and Dateline interviews with Joe Wilson over the weekend were disgraceful. I remember thinking Joe Wilson was history back when the 9/11 commission report and the Senate Intelligence committee reports revealed, through memos and testimony, that he had told a series of lies about his tea sipping adventure in Niger. Silly me. I should have known that the media would simply ignore any facts that did not fit their version of the story. Absolutely disgraceful. He needs to be called on this by people like Campbell Brown and Katie Couric.

Justrand has a good suggestion in the comments section:

Frist should go before the cameras and say:

America DOES need answers!
– WHY did Sandy Berger steal top secret documents during the 9/11 hearings??
– WHY did Joe Wilson LIE in his Op/Ed and what did he REALLY find out?
– WHY was Joe Wilson chosen in the first place?
– WHY did Clinton close down Able-Danger and what did they learn?

With all of the coordinated attacks going on between these Leftists it means we can probably expect more of this.

The Anchoress explains where the WMD intelligence came from in the first place.