Koreas Making Peace with Each Other, While Attacking US

North and South Korea are making positive moves in relations as the North has released prisoners to the South and both countries are talking about joining together at the Olympic Games. However, extreme Anti-Americanism is on the rise in South Korea at the same time.

After 18 years a South Korean Fisherman is welcomed home. 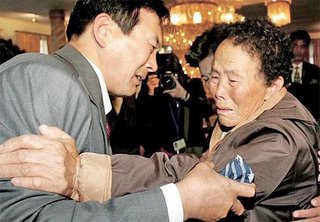 South Korean mother Kim Jong-sim, right, cries with her son Jung Il-nam, left, who was a fisherman abducted to North Korea in 1987, during the second round of the 12th reunion since the two Koreas agreed to promote peace and reconciliation at an unprecedented summit between their leaders in 2000, at Diamond Mountain in North Korea on Tuesday, November 8, 2005. A group of 144 South Koreans left for the North Korea Tuesday to hold reunions with relatives there for the first time in over five decades. (Hindustan)

North Korea, however, lashed out at the US for shattering the trust at the nuke-free Korea talks.

Last week it was announced that the two Koreas would participate as one team at the Olympics.

The propaganda campaign against the US in Korea is quite bold today. HERE is a popular downloaded video from US in Korea in South Korea called, “F*cking USA”.

A Korean-American, Robert Kim, who spent about eight years in jail for illegally passing U.S. military secrets to Seoul returned to South Korea on Sunday where he was given a heroes’ welcome.

This is a sign at a business in South Korea. 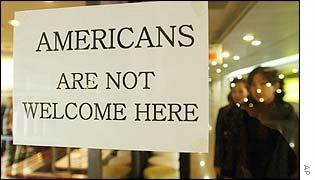 Joshua at One Free Korea says that discrimination against Americans from businesses in South Korea is quite common. However, Americans are now being banned at some public events. 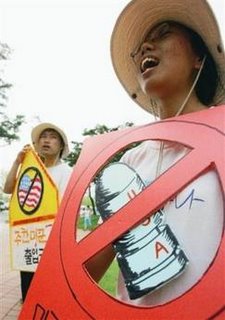 Joshua says these protesters at a soccer match in South Korea hold signs that say, “American soldiers not admitted.” Joshua at One Free Korea wrote to the Human Rights Committee about the discrimination and explains the odd reply he got.

And, this is what the children are learning in South Korea…

The South Korean Teacher’s Union with connections to the North Korean Regime made a shocking video for children in South Korea:

The video shows Bush as given to spitting expletives and is full of four-letter-words and abusive language.

Again, Joshua has more on this story and has the videos posted at One Free Korea.

It wasn’t 2000 soldiers we lost in the Korean War, it was 34,000soldiers and marines who gave their lives in Korea only 50 years back. It is sad to see the country heading in this Anti-American direction.