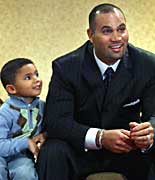 Albert Pujols sits with his four-year-old son Albert Jr. as he is introduced Tuesday at a press conference. After a restless night of anticipation, Cards slugger Albert Pujols got the news he wanted when he was named the National League’s Most Valuable Player.
(Andrew Cutraro/P-D)