Naked protesters in Brisbane, Australia send a message of peace. 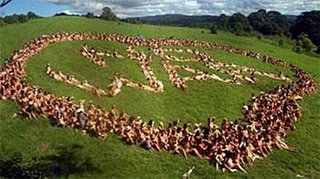 Paul Hellyer, Canada’s Defence Minister from 1963-67 under Nobel Peace Prize Laureate Prime Minister Lester Pearson, publicly stated: “UFOs, are as real as the airplanes that fly over your head.”

Mr. Hellyer went on to say, “I’m so concerned about what the consequences might be of starting an intergalactic war, that I just think I had to say something.”

Hellyer revealed, “The secrecy involved in all matters pertaining to the Roswell incident was unparalled. The classification was, from the outset, above top secret, so the vast majority of U.S. officials and politicians, let alone a mere allied minister of defence, were never in-the-loop.”

Hellyer warned, “The United States military are preparing weapons which could be used against the aliens, and they could get us into an intergalactic war without us ever having any warning. He stated, “The Bush administration has finally agreed to let the military build a forward base on the moon, which will put them in a better position to keep track of the goings and comings of the visitors from space, and to shoot at them, if they so decide.”

Could this story have anything to do with this news from Canada?

Glenn Reynolds has much more on the alien reaction to this news, and it is not good!

Will Bush bomb their News Stations? Will they topple as easy as Saddam Hussein?

Will Home Depot stock up on tin foil hats?