JORDANIAN GROOM BURIES HIS FATHER AND OTHER RELATIVES,
VIDEO HERE 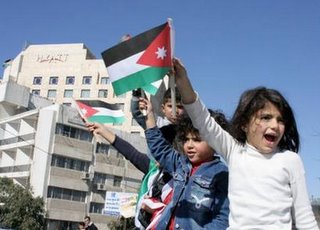 Thousands took to the streets to protest the Wednesday Al Qaida hotel bombings in Jordan:

From the capital, Amman, to the northeastern industrial town of Zarqa, the birthplace of “al-Qaida in Iraq” leader Abu Musab al-Zarqawi, thousands of Jordanians vented their fury for the second straight day over Wednesday’s bombings and called for al-Zarqawi’s death.

“Al-Zarqawi is rejected by everybody in Zarqa, even by his family members,” said Mohammed al-Sharaa, a neighbour of the terror leader’s clan in Zarqa.

“Al-Qaida in Iraq” issued its third Internet claim since the attacks, saying four Iraqis, including a married couple, had the Radisson SAS, Grand Hyatt and Days Inn hotels under surveillance for a month before detonating explosive belts “to achieve greater accuracy in hitting the target.”

Police have detained more than 120 people, including many Iraqis and Jordanians, in the massive manhunt for anyone who may have helped the bombers, who strolled up to the three hotels and detonated their explosive belts almost simultaneously.

“Halloween” film producer, Syrian-born Moustapha Akkad, was killed in one of the hotel blasts. 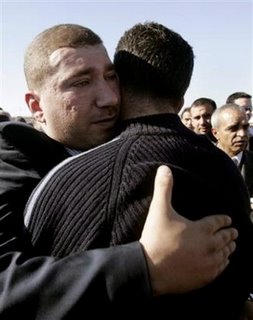 Ashraf al-Akhras the Jordanian groom, left, whose wedding party was attacked by a suicide bomber comforts a man whose cousin died in the bombing, at Sahab cemetery during a funeral procession in Sahab southeast of Amman, Jordan, Friday Nov. 11, 2005. Wednesday’s attacks killed atleast 57 people, excluding the bombers. (AP Photo/Hussein Malla)

A three month old baby survived the wedding party bombing. But, the baby’s mother was murdered in the homicide bombing. –FOX News