This is cool. John Bolton met with fellow democracy blogger and friend Joshua from One Free Korea yesterday.

“Our agenda was the horrific state of human rights in North Korea, a situation that I believe to be the worst on earth today, and perhaps as bad as any we have seen since the demise of the Khmer Rouge.”

Well, unless Representative Murtha and the democrats get their way!

Joshua gives his overall impression of John Bolton , something you won’t hear on the news wires.

And, as not seen in the news! 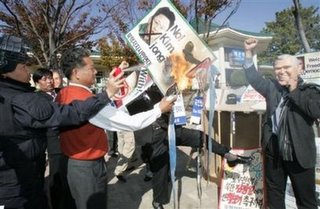 Pro-Bush demonstrators, one of them wearing a Bush look-alike mask, chant slogans as they set a fire on a North Korean national flag, while a riot police officer sprays fire extinguisher from behind during a protest against North Korean nuclear ambitions in Busan, South Korea, Friday, Nov. 18, 2005. Leaders from across the Asia-Pacific region gather in this southern port city for an annual summit. (AP Photo/Ahn Young-joon)