Last year during the runup to the November election, Arianna Huffington asked us all to look deep into our hearts and answer this gut-wrenching question:

“This post goes out to all those good ol’ boy soldiers out there who insist that Kerry is a traitor and aided the enemy in a time of war. My question is, are these soldiers traitors too? …Hoffman, Brandon Hughey, and Staff Sergeant Jimmy Massey?”

Today we can assure Arianna that the answer is a resounding, “Yes”. Yes, Arianna Jimmy Massey is a traitor, too! 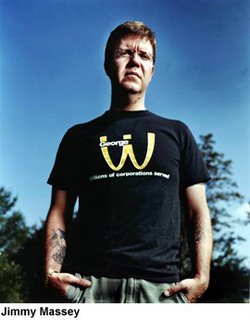 Last year there was an article posted on the Swift Boat and POW Veterans for Truth website by by Beatrice 1000. She described the whole interwoven connections between the two anti-war groups from Vietnam and Iraq. There was even a passing of the guard ceremony between the two groups in Central Park! It appears that the new bunch is getting their training from the old guys:

I have found some old-time VVAW names & others, involved now with VAIW & IVAW:

Joe Bangert
–9/07/70: With Kerry/Fonda at Operation RAW (Rapid American Withdrawal), Valley Forge, PA
–1/31/71: Testified at WSI: …the men were afraid to complain about such atrocities because those who complained were subject to harsh discipline by company commanders.
–FBI/Sec. 2, p38, data on flyer about WSI testimony being handed out: JOE BANGERT, 22, Sgt. E-5, helicopter gunner (1968-69), PA resident, testifies to the disembowlment and skinning of Vietnamese woman by an American, after she was killed by ARVNs. Body was hung on a tree as a warning to other gooks. He further testifies to killing villagers – 20 or more women, children, old men — in helicopter assaults near Cam Lo, and of civilians shot without provocation along Highway 1 near Dong Ha in Oct. 1969
–5/19/97: Paid respects at tomb of Ho Chi Minh (indicated founding date of the VVAW – 5/19/67 – coincides with birthdate of late Vietnamese President)
–2003: At Joe’s Pub in NY went on stage to sing “Ballad of Ho Chi Minh” in original Vietnamese (ode to the pres. of No. VN)
–2004: Endorses VAIW

Bobby Muller (Mueller?)
–1978 founds the Vietnam Veterans of America (VVA). The VVA also describes John Kerry as a “co-founder” of the organization. In the late 1980s, Mueller & the Vietnam Veterans of America Foundation (VVAF) split from the VVA.
–Led a VVAF delegation to Hanoi, where he praised the communist leadership of Vietnam & laid a wreath on the grave of Ho Chi Minh.

…One grizzled ex-Marine climbs a shelf-rock and yells out “Let’s hear it for IRAQ VETERANS AGAINST THE WAR!”. Joe goes on to cite the Announcement of the Founding of IVAW “7/24/04, in Boston MA!” “Come on up here Mike, and say a few words”. This call interrupts a historic moment, taking place just a few yards away. Mike Hoffman, founder of Iraq Veterans Against the war, is engaged in quiet conversation, with the ever understated Jan Barry, founder of Vietnam Veterans Against the War. The Passing of the Torch. Then Mike is up on stage… introducing addnl. members of IVAW, and thanking the Vietnam Vets for their Inspiration and Mentorship. Each of the New Vets takes their turn at “a few words for the brothers”.. “Just like you guys”, says one, “we are growing like wildfire because, like yours, our leadership has failed us, and our cause is JUST”. “Just like you guys”, says another, “we answered The Bell, and did our job. Now it’s time for THEM to do right by US!”.

Dave Cline says a few words to define the Moment. Like many old Vietnam Vets, he recognized long ago, that the Invasion of Iraq had DEEP parallels with our sad mis-adventure in Vietnam. For starters, yet another immoral, illegal war. He’s been working tirelessly since the very start of the Bombing of Baghdad, to bring the collective experience of VVAW to the grunts in uniform, doing the dirty work of our Government, in the heat, and sand, and chaos, that is Iraq. “The torch is being passed”, says Dave. “Right here, Right now, my long-time dream is coming true, and the Torch is being PASSED!”. A mighty cheer arises in Central Park…

Michelle Malkin has more on Jimmy Massey today and wrote about his support of an American draft dodger last year.

GOP and The City reports that Jimmy Massey CD’s are now 50% off!

And, here is an update on Jimmy’s Strange Flip-Flopping.