Commentators wonder is Jacques will be able to recover roar? 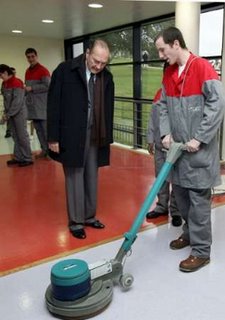 The French wonder if there is any roar left in this old lion?

President Jacques Chirac will celebrate his 73rd birthday tomorrow knowing that 72% of the French believe he now has little or no influence over the country.
A poll for the daily Le Parisien showed yesterday that even in his ruling party, the UMP, only 43% of voters feel Mr Chirac plays a major role in France.

His authority was undermined by France’s rejection of the EU constitution and this month’s urban violence. But commentators warn against writing him off too soon. “Everyone recognises the Chirac page has been turned,” one said. “But everyone’s afraid of the old lion’s last roar.”

Jacques Chirac loses the confidence of the people:

Two thirds said his clout on the world stage was feeble, while only 36 per cent thought he held any significant sway over European politics.

Condemnation came from all age groups and corners of France. Women were slightly less critical.

The poll, conducted for Le Parisien newspaper by the CSA institute, was all the more humiliating in that the opinion of supporters of Mr Chirac’s conservative ruling UMP party was scarcely more favourable than those of voters on the Left. Only 43 per cent of UMP voters thought he still had a leading role to play in France.