The Democrats appear to be swirling in pride with their theatrical stunt. Word to Harry Reid, “Keep your day job!” 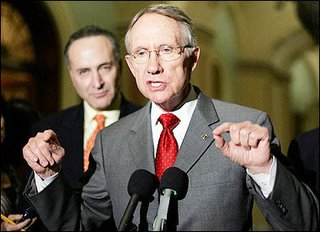 “Obviously we know now their nuclear claims were wholly inaccurate. But more troubling is the fact that a lot of intelligence experts were telling the Administration then that its claims about Saddam’s nuclear capabilities were false.

“The situation was very similar with respect to Saddam’s links to Al Qaeda. The Vice President told the American people, “We know he’s out trying once again to produce nuclear weapons and we know he has a longstanding relationship with various terrorist groups including the Al Qaeda organization.”

Senator Harry Reid (D-Nev)
Senate Minority Leader on the floor of the U.S. Senate calling for a secret session of the Senate.
Democratic Party Website
November 2, 2005

Senator Harry Reid made those remarks to the open Senate moments before his theatrics to close the Senate session, the first time in more than two decades the chamber has been forced into a closed session without bipartisian agreement. Harry Reid said that there were “numerous instances where the Administration misstated and manipulated the facts” and then proceeded to mistake the facts himself!

Reality: The Vice-President wasn’t the only one who felt this way:

“(Harry) Reid voted in October 2002 to authorize a U.S. invasion of Iraq because of what he claimed was “the threat posed by Saddam Hussein.” The Reid-backed resolution falsely accused Iraq of “continuing to possess and develop a significant chemical and biological weapons capability … [and] actively seeking a nuclear weapons capability, thereby continuing to threaten the national security interests of the United States.”

And, Hawk Harry was not the only democrat who believed this. Senators Clinton, Schumer, Dodd, Kerry, Edwards, and Biden all voted in favor of the resolution.

Reality: President Bush and Vice President Cheney were not the only ones who believed in Saddam’s nuclear ambitions and capabilities:

President Clinton said this in an address on December 16, 1998 after bombing sites in Iraq: “Earlier today, I ordered America’s armed forces to strike military and security targets in Iraq. They are joined by British forces. Their mission is to attack Iraq’s nuclear, chemical and biological weapons programs and its military capacity to threaten its neighbors.”

And, even Jimmy Carter agreed on the dangers of Saddam’s weapons back in February, 2003:

“We want Saddam Hussein to disarm but we want to achieve this through peaceful means. He obviously has the capability and desire to build prohibited weapons and probably has some hidden in his country.”

Reid: But more troubling is the fact that a lot of intelligence experts were telling the Administration then that its claims about Saddam’s nuclear capabilities were false.

Reality: False. Even Democratic Hero, Ambassador Joseph Wilson testified on Iraq’s interest in purchasing uranium to the Senate Committee on Prewar intelligence (something in complete contradiction to what he said in his New York Times op-ed and numerous speaking engagements):

(via Powerline) [The CIA reports officer] said he judged that the most important fact in
the Joe Wilson report was that the Nigerian officials admitted that the
Iraqi delegation had traveled there in 1999, and that the Nigerian Prime
Minister believed the Iraqis were interested in purchasing uranium,
interested in purchasing uranium, because this provided some
confirmation of foreign government service reporting.

(Page 46 of the report, page 56 of the PDF, Report on Prewar Intelligence)

Hence, Joe Wilson is a liar of the first order: his research tended (in the CIA’s opinion) to confirm the report, yet Wilson claimed to the Post and other news sources that his report had shot down those same reports.

Reid: “The situation was very similar with respect to Saddam’s links to Al Qaeda….he has a longstanding relationship with various terrorist groups including the Al Qaeda organization.”

Reality: The 9-11 Report mentioned the Iraq-Al Qaida ties more than once including this:

“On particular projects, specifically including weapons development, al Qaeda would work cooperatively with the Government of Iraq.”

I’d say that is a pretty clear link!

The commission investigating the Sept. 11, 2001, terror attacks has received new information indicating that a senior officer in an elite unit of the security services of deposed Iraqi dictator Saddam Hussein may have been a member of al-Qaida involved in the planning of the suicide hijackings, panel members said Sunday.

John F. Lehman, a Reagan-era GOP defense official told NBC’s “Meet the Press” that documents captured in Iraq “indicate that there is at least one officer of Saddam’s Fedayeen, a lieutenant colonel, who was a very prominent member of al Qaida.”

Even Al Gore knew about this link back in 1998:

The Bush administration was not the first to assert dangerous ties between Iraq and al-Qaida. Perhaps then-Vice President Gore missed a prominent feature in the fourth paragraph of the Department of Justice’s Nov. 4, 1998, indictment of Osama bin Laden:

This was before he accused the Bush Administration of lying about the link between al-Qaida and Iraq.

Reid: “The Administration’s assertions on this score have been totally discredited.”

Saddam Hussein’s government feigned acceptance of Zarqawi’s offer and allowed him some freedom of action in Baghdad in return for his promise. This was a ruse; they agreed to let Zarqawi and his group operate freely in Iraq with the purpose of leading them to trust the Iraqi Security Services and relax their guard. In this way, it was supposed the Zarqawi group could be easily captured and possibly be used as bargaining chips with the Americans. This plan was recommended by the Egyptians who further suggested that Baghdad might be seen to join the supporters of the American ‘war on terror’ by giving Zarqawi to the Americans or killing him and destroying his group that may garner some goodwill with the Americans to avoid the planned invasion of Iraq.

George Bush gave Saddam Hussein’s officers neither opportunity nor time to negotiate a deal to hand over Al-Qaida operatives and so Zarqawi escaped the danger.

And, how quickly the Democrats forget this from the January 11, 1999, Newsweek (via Free Republic)

Saddam Hussein, who has a long record of supporting terrorism, is trying to rebuild his intelligence network overseas–assets that would allow him to establish a terrorism network. U.S. sources say he is reaching out to Islamic terrorists, including some who may be linked to Osama bin Laden, the wealthy Saudi exile accused of masterminding the bombing of two U.S. embassies in Africa last summer.

Free Belarus tries to understand the puzzle that if Saddam knew the US wasn’t bluffing then why didn’t he come clean?

Update: (November 4, 2005) Opinion Journal has a piece on how Harry and the Democrats lied about Bush lying.