This is history-making news from Freedom for Egyptians:

“There’s a problem inside of Islam. The problem is not Jordan or the United States or Saudi Arabia.”

“March of a Nation” protest 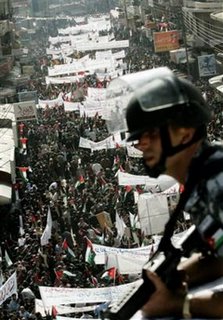 A Jordanian soldier guards during an anti terrorism rally in downtown Amman, Jordan, Friday, Nov. 18, 2005.Tens of thousands of flag-waving Jordanians thronged downtown Amman on Friday in the “March of the Nation,” a noisy, emphatic demonstration against the deadly terror attacks that struck the kingdom last week. (AP Photo/Nasser Nasser)

Also, today Al Zarqawi will have nothing to do with the evil Moderate Islamist from Jordan. In a released tape, Zarqawi announced that he wants to chop off King Abdullah II’s head, and that by the way, he is sorry about that bombing on the wedding party:

“Your star is fading. You will not escape your fate, you descendant of traitors. We will be able to reach your head and chop it off,” al-Zarqawi said, referring to the king…

…Al-Zarqawi told Jordanians to stay away from bases used by U.S. forces in Jordan, hotels and tourist sites in Amman, the Dead Sea and the southern resort of Aqaba and embassies of governments participating in the war in Iraq, saying they would be targeted.

He underlined that al-Qaida in Iraq is not targeting fellow Muslims. “We want to assure you that … you are more beloved to us than ourselves,” he said, addressing Jordanians.