Young Ethiopian Diasporans begs for the world and US to pay attention to those dying for democracy in Ethiopia today: 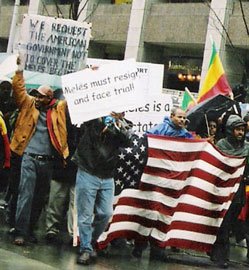 Several hundred Ethiopians in the City of Seattle marched through the streets of the city on November 4, protesting against the all-out attack on fellow Ethiopian people being carried out by the Meles regime. (Photo: Muluneh Yohannes at Ethiopia Media)

This past June, the government of Prime Minister Meles gunned down 42 unarmed people. It had promised to investigate the deaths. It didn’t. This week, up to 100 unarmed people have been killed and all the leaders of the opposition have been jailed. This latest killing spree was in response to people honking their horns for 30 minutes in protest of the rigged elections.

We have long been sending you updates on the Ethiopian situation, and some of you have kindly written about it. Yet, Ethiopia’s story remains under the radar. Those of us who believe in democracy have a moral obligation to speak up. A neo-Marxist government is violating all the tenets of democracy, and the more we let it happen, the quicker it will spread all over the continent. Ethiopia is the second most populous country in Africa, an ancient country that is located in a strategic part of Africa. It is in our self-interest to ensure that Ethiopia does not disintegrate.

Ethiopia has an ancient culture that includes one of the earliest Christian Communities in the world. 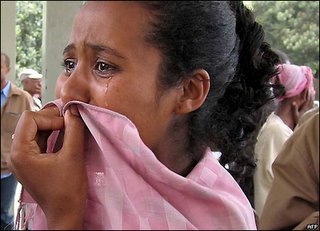 Most of the clashes occurred in the commercial district of Mercato, where many people were shopping in preparation for the Eid festivities. (BBC)

The UK’s The Times has a great story on how the killings are straining UK-Ethiopia relations:

Continued violence is a deep embarrassment for Tony Blair, who championed the Ethiopian Prime Minister as belonging to a new breed of reformist African leaders. Ethiopia is one of Britain’s biggest aid recipients. 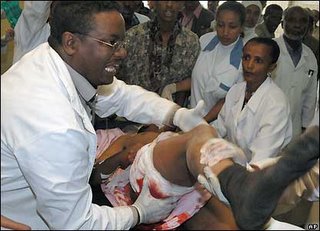 Opposition supporters are protesting about May’s elections which they say were rigged. (BBC)

Anna Gomes, Member of the European Parliament and Chief Election Observer, is quickly becoming the champion of democracy in Ethiopia. She wrote this scathing letter to her fellow MPs. Listen to her interview with the VOA here.

Congressman Chris Smith (R-NJ) has also been quick to defend democracy. He sent this statement.

We were heartbroken by the State Department’s line that the protests were cynical attempts by opposition activists to provoke violent incidents. It is in direct contradiction to our president’s promise that “All who live in tyranny and hopelessness can know… the United States will not ignore your oppression, or excuse your oppressors. When you stand for your liberty, we will stand with you.”

Ethiopundit debunks the Ethiopian government’s saber rattling of a renewed conflict with Eritrea which it is using as a cover for unleashing its violence.

Blogger Weichegud has links to stories of some of the people shot, including one of a seven-year-old.

Young Ethiopian Diasporans ends with this…

“If we let democracy falter in Iraq and Ethiopia, history will judge us harshly.”

Democracy Activists are meeting every night at 6:00 PM in Lafayette Park across from the White House in Washington DC.

Publius Pundit has a large collection of postings on this struggle in Ethiopia.