Update: (Thursday AM) Al Qaida says it is a response to the Iraq War.

Powerline has the sad story about the wedding reception that was interrupted by one homicide bomber. 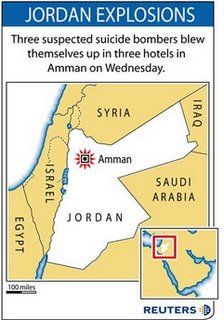 Three Suicide bombers are suspected in the blasts at three hotels in Amman, Jordan today:

Reuters witnesses said there had been explosions at the Radisson SAS, where a wedding party was taking place, and Grand Hyatt hotels in Amman. Jordan’s official news agency Petra said a third blast had hit the Days Inn hotel in the city.

The agency said the blasts were caused by suspected suicide bombers. Police sources earlier told Reuters the Radisson blast had been caused by a bomb placed in a false ceiling.

Jordanian police spokesman Captain Bashir al-Da’jeh told Al Jazeera television: “At 9 this evening, there were three terrorist explosions in three hotels in Amman. There are a number of dead and wounded. They are believed to have been carried out by suicide bombers.”

And, get this, a CNBC producer blamed Bush for the attacks! 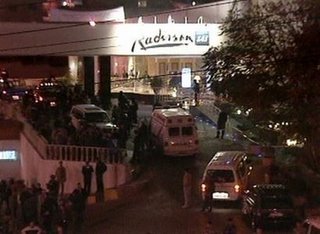 Image from television shows an exterior view of the entrance to the Radisson hotel in Amman Jordan, one of there hotels attacked by suspected suicide bombers, Wednesday evening Nov 9 2005. At least 52 people have been killed and more than 120 were injured in the explosions. The Radisson explosion ripped through a banqueting room where about 250 people were attending a wedding reception. (AP Photo/ APTN)

Omar at Iraq the Model says this,

“The people pay for their governments’ and media’s denial and delusions…as simple and as sad as that.”

And, don’t forget “History’s Largest Terrorist Attack Trial Ever” in June of this year where a huge chemical weapon’s attack was foiled!

Ten of the captured Al-Qaida terrorists on trial in Jordan for attempting to explode roughly 20 tons of chemical weapons with explosives. Authorities captured the weapons coming into Jordan through Syria.

The most dangerous terrorist plot ever foiled and brought to trial is being prosecuted right now in Jorddan. Al-Jayouzi, a follower of Al-Zarqawi, is on trial for planning and attempting to execute a Chemical Weapons attack in Jordan that could have killed as many as 80,000 civilians: 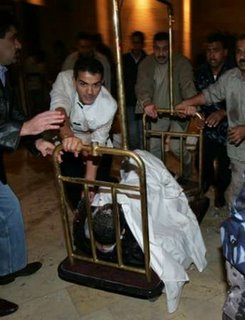 Wow! Hammorabi has warnings for other Arab States!

Abo-Musaab Alzarqawi groups are planning serious attacks and may be on the same time against important targets inside other Arab states like Jordan, Lebanon or Saudi Arabia so soon.

We will see who is next? And where?

1. Vehicle explodes outside hotel after being stopped at a police checkpoint
2. In the most deadly attack, a bomb destroys a banquet room where a wedding reception was being held. Dozens injured by shrapnel
3. Suicide attacker detonates bomb in hotel bar, just before 2100 local time. Two senior Palestinian officials are among the dead
(BBC)

Athena has a huge roundup and updates. She predicted this a while back and says that this will backfire for the terrorists.