Will we ever get to celebrate?

“To the troops, the war is being won. They see bad guys killed in large numbers, and few Americans getting hurt (it’s fairly common for their to be about twenty enemy dead for each American loss). The troops see tangible evidence, every day, of Iraqis having a better life. The troops cannot understand why that is not news, and why journalists always seem to be looking for a negative angle.” 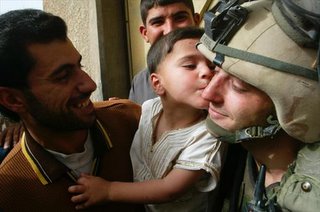 An Iraqi child thanks a US soldier stationed in Iraq. (Operation Iraqi Children)

It is too bad that the democrats wanted to leave the people of Iraq to fend for themselves, especially since we are so close to completing the job.

TRENDING: Remember the Young Woman Who Died While Waiting for a Coronavirus Test in New Orleans? ...Yeah, Well Now the Truth Is Out

Defense Secretary Donald Rumsfeld said today that the US has plans to decrease troops in Iraq after the election in December:

Rumsfeld said, “Put yourelf in the Iraqi’s shoes who have put a great deal at risk to run for public office, who support the elections and support the Constitution, and subject themselves to risk of assassination. Put youreslf in the shoes of the enemy, the enemy hears a big debate in the United States and they have to wonder maybe all we have to do is wait and we’ll win.”

But Rumsfeld rejected the notion of setting a date by which the United States will leave Iraq altogether.

“Ask yourself if that country, with their oil and their water and their intelligent people, is turned into a haven for terrorists, compared to the opportunity we have to have that be a democratic system that’s respectful of its people, at peace with its neighbors, and the difference for us — the dangers for the American people will be vastly different depending on how we manage ourselves,” Rumsfeld said.

Rumsfeld said that the immediate mission is to prepare for the Dec. 15 election, in which a new Parliament will be chosen. In preparation for that election, the number of troops has risen to 159,000 from 138,000. Rumsfeld said that when the Dec. 15 election is finished, the number of U.S. troops will likely go back down to the “baseline” of about 138,000.

On the ground in Iraq, Col. Edward Cardon of the 3rd Infantry Division said that his troops are helping Iraqi soldiers prepare for the Dec. 15 election, and that they expect a very high turnout. He added that while a lot of threats of violence were made in two prior elections this year, they never materialized.

“The troops really are focused on the 15th of December elections. We have a lot of work to do to train the Iraqi security forces,” Cardon told FOX News, adding that the goal is to “make as secure an environment as possible.”

The secretary said that after the election is complete, U.S. troops will continue transferring security responsibility to the Iraqis. Rumsfeld said he will follow the recommendations of U.S. military commanders on the ground when it comes to additional reductions in the future.

President Bush chimed in from China

“Leaving prematurely will have terrible consequences, for our own security and for the Iraqi people. And that’s not going to happen so long as I’m the president. This is a debate worthy of our country; it’s an important debate. It does not have to be a partisan issue,” Bush said.

After the elections the troops will go back down to pre-election levels. There is talk now of decreasing troop level from 160,000 now to less than 100,000 by the end of next year.

Downsizing US troop levels in Iraq will put the numbers equal to the deployment numbers in Europe (at approximately 100,000).

Rumsfeld also chuckled when asked if he were Bob Woodard’s source in the Plamegate case.

(But, fingers are pointing at Richard Armitage, via Glenn Reynolds.)

Lorie Byrd thinks the troop reduction news was behind the Democrat’s noise in the House this week.

The US and Allies in Iraq continue to make great strides in rebuilding the ravaged infrastructure in Iraq although this news is not reported frequently in the Western press.

Shawn Wassan and the Right Brothers agree that Bush was Right.

Ralph Peters at the New York Post agrees that with the progress there is still one way to lose the war, Surrender!

Powerline has more from the Washington Times on how our troops are handling the negative comments from the Democrats and press.