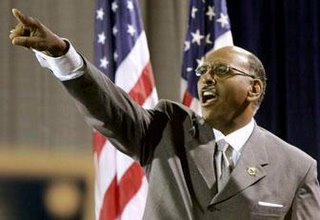 Such attacks against the first black man to win a statewide election in Maryland include pelting him with Oreo cookies during a campaign appearance, calling him an “Uncle Tom” and depicting him as a black-faced minstrel on a liberal Web log.

Operatives for the Democratic Senatorial Campaign Committee (DSCC) also obtained a copy of his credit report — the only Republican candidate so targeted.

But black Democrats say there is nothing wrong with “pointing out the obvious.”

“There is a difference between pointing out the obvious and calling someone names,” said a campaign spokesman for Kweisi Mfume, a Democratic candidate for U.S. Senate and former president of the National Association for the Advancement of Colored People.

State Sen. Lisa A. Gladden, a black Baltimore Democrat, said she does not expect her party to pull any punches, including racial jabs at Mr. Steele, in the race to replace retiring Democratic U.S. Sen. Paul S. Sarbanes.

“Party trumps race, especially on the national level,” she said. “If you are bold enough to run, you have to take whatever the voters are going to give you. It’s democracy, perhaps at its worse, but it is democracy.”

Maryland Governor Robert Ehrlich stands up for Steele and says Steele is powerful:

A blogger has depicted Steele in minstrel makeup, an image that has brought to the surface racial issues that are an undercurrent in the 2006 campaign as the Republican seeks to become Maryland’s first black US senator.

And, Steele gets credit for standing up for ex-cons:

I haven’t heard any of the allegedly liberal Democratic candidates for U.S. Senate mention it, but the leading Republican candidate did – and on the first day of his campaign. Lt. Gov. Michael S. Steele visited one of the “I Can’t, We Can” residential drug-treatment centers (“Change you must, or die you will”) in Baltimore, then went to lunch and challenged a group of business owners to give ex-offenders a chance by putting them to work.

Amazing. A public official in Maryland asked business people to consider hiring recovering drug addicts as a way of breaking the costly and depressing cycle of crime-incarceration-unemployment-crime.

“I want to talk about the two rooms I visited – the I Can’t We Can environment and the small business environment, and I want to build a bridge between the two,” Steele said.

Steele said he knows that when ex-offenders fill out job applications, the hardest question is the one that asks, “Have you ever been convicted of a felony?” People will spend five minutes staring at that question, he said, trying to decide what to do. If they check yes, their application goes in the trash; if they answer no, they might get the job but live in fear that someone will discover the truth.

Michelle Malkin has more on this Democratic phenomena today.