Last night– A nursery school was torched by youths in the southern French town of Carpentras, and a burning car was pushed up to an old people’s home, which caused panic among residents.

The EU is offering France $59 million in aid after the rioting. 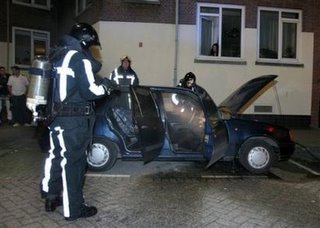 Firefighters are seen next to a car which was set ablaze in the city of Rotterdam, Netherlands, in the early hours of Sunday Nov. 13, 2005. Youths in the Dutch city of Rotterdam set four cars on fire overnight in a working class neighborhood, police said. Some 11 cars in total were burned or had their windows smashed. Police didn’t make any arrests and were searching for the culprits, and said it was too early to say if the incident was a spill over of the French riots in recent weeks. (AP Photo/Roel Dijkstra, Remon Duivestein)

Dutch officials are watching the riots in France closely hoping the violence will not cross over into the Netherlands where 1 out of 5 are of foreign descent:

In the Netherlands, where almost 20% of the population is of foreign descent, the riots in France are also being closely monitored.

“We really don’t need to be afraid that the Netherlands or Europe will be in flames within a few weeks,” Han Entzinger, professor of migration and integration studies at Erasmus University in Rotterdam, told the Algemeen Dagblad daily.

“In France there is an explosive mixture,” he added. “The apartment blocks in the suburbs were put up for the newcomers. That is a big difference to here. Our immigrants ended up in existing districts and houses of much better quality.”

In Germany five cars set on fire in Berlin on Sunday and six in the western German city of Bremen. Some 3.2mn Muslims live in Germany, making it the second largest Muslim community in Europe after France. 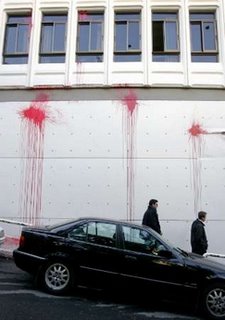 Groups of anarchists broke windows, threw paint and spray-painted slogans at French cultural institutes in Athens and northern Greece in support of rioters in France, Greek police said on Friday.

About 50 people, wearing hoods and helmets and carrying red and black flags, threw stones, spark plugs and bottles filled with paint at the central Athens French Institute on Friday morning, breaking windows and damaging parked vehicles. Police said there were no injuries and the group dispersed quickly after the attack.

Another group attacked the French institute in the northern city of Thessaloniki on Thursday evening, smashing windows while classrooms were filled with language students. They spray-painted “Rioters Are Right” on the front of the building.

The Brussels Journal has information on the rioting in Belgium. 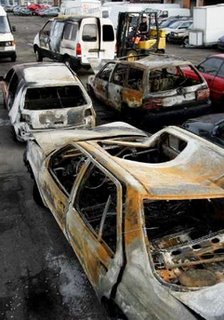 A mechanic moves remains of torched vehicles with a forklift in the garage of a car service company in Brussels November 10, 2005. Youths set fire to 15 vehicles across Belgium in a fourth night of attacks which authorities said looked like imitations of violence in France. (REUTERS/Francois Lenoir)

FRENCH far-right leader Jean-Marie Le Pen has blamed rioting which has spread across the country on massive immigration into France, and criticized the government response as insufficient.

The riots “result from massive, uncontrolled immigration from the Third World,” he said. “We knew it was a global time bomb.”
France has been rocked by two weeks of car-burnings, arson attacks and rioting carried out mostly by young Arab and black residents of poor suburban high-rise estates, who complain of economic misery and racial discrimination.

Ireland is also concerned. Irish Prime Minister Bertie Ahern warned on Sunday that action must be taken to prevent ghettoisation of immigrants to ensure the country does not experience French-style riots.

The exceptional French Blog, No Pasaran, lists the damage totals and leads in with this classic line…

The last Renault Twingo in France was KFC’ed last night in Toulouse while the terror of the stupid, blinged-out hoodlums seems to be tapering off. I’d say that it might have something to do with using arrests as a disincentive, but no leftist would believe me.

Priceless!
This graph, courtesy of No Pasaran, notes the number of torched cars is nearing a “grim milestone” of 10,000. It may be in French, but it is still easy to understand: 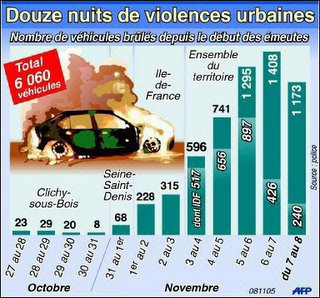 And, you MUST read Chavtowns to understand the situation as many others in France see it.

The New York Times and Washington Post predict the riots will not spread in Europe.

Gina Cobb asks 10 Questions on the Violence in France that have yet to be answered.

The Anchoress has thoughts on how the press has covered (or not) the French rioting story.