Today, France faces grim milestones of
20 days of rioting and with last nights total of 215 cars torched it brings the grand total to 10,024 automobiles torched this year!

Jacques Chirac bravely leads his people declaring, “We will respond (to the violence) by being firm, by being fair and by being faithful to the values of France.” 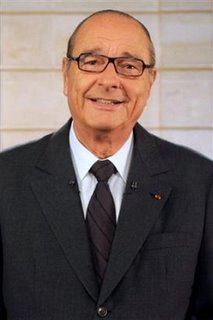 In a brave move on Monday, Jacques Chirac approved extending the emergency order in France and aims to strive for diversity:

In a fresh sign that violence is on the wane, police said on Tuesday 215 vehicles were destroyed overnight in the 19th straight night of trouble, against 284 the previous day. In only 7 of France’s 36,000 municipal districts were more than five cars destroyed!

The center-right government has decided to seek the extension of the measures, such as curfews, to help stamp out violent protests against racism and unemployment by youths of African and Arab origin as well as white youngsters.

“We will respond (to the violence) by being firm, by being fair and by being faithful to the values of France,” Chirac said in a television and radio speech, his first direct address to the nation since the unrest began on October 27.

Another busy night for fire fighters. 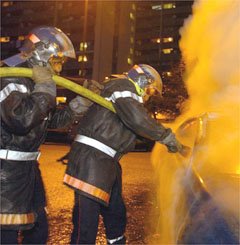 John O’Sullivan in the Chicago Tribune has differing thoughts on the current violence in French Society:

Is France’s oppression of the “beurs” (slang term for the North African Muslims) a major factor? No — at least not in the usual sense of the word “oppression.” Muslim young people, especially young men, suffer some discrimination in employment. But they have a reasonable standard of living by French standards, access to welfare and low-cost public housing, and something like immunity from arrest and imprisonment for casual street crime (which has consequently risen substantially in recent years.)

Ironically, the riots were “provoked” by the decision of the interior minister, Nicholas Sarkozy, to send the police into these “no-go areas” in response to the pleas of the respectable older people living in them under the oppression of their children.

In what way, then, are France and the French government to blame? Well, it is really the social good intentions of the French that oppress the beurs. France’s prized “social model” — which President Chirac contrasts with the barbarism of Anglo-Saxon market economics — makes it very expensive to hire or fire employees.

Two results flow from that. The first is that employers hire fewer people in total — thus the French unemployment rate is twice as high as America’s. This persistent high unemployment, incidentally, makes nonsense of the argument that immigration is needed for economic reasons.

What other identities are available? A “European” identity is simply not an option. If young North African Muslims don’t identify with the French — with whom they have a long history — they certainly won’t identify with Finns and Austrians. A Muslim identity, on the other hand, is an option — and in the present circumstances a Muslim identity rooted in hostility to the West would be a relatively easy sell.

It could even be combined with Europeanism to forge the only “European” identity that looks even half-viable: a Euro-Muslim identity bent on converting post-Christian Europe to sharia law. Demography would help this trend along since, according to some statistics, about a third of French births will be to North African Muslim women in coming years. These various trends must be a powerful incentive to frustrated and unhappy young men to join what looks like the winning Muslim side in a war of civilizations. 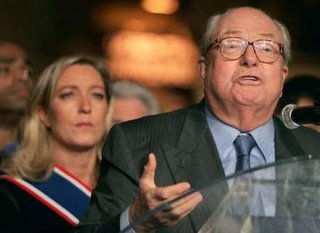 France’s far-right leader Jean-Marie Le Pen (R) delivers a speech as his daughter Marine watches during a National Front party demonstration criticising the French government’s handling of the urban unrest in poor suburbs of the Paris region and major provincial cities, in Paris November 14, 2005. The French cabinet agreed to ask parliament for a 3-month extension to emergency powers as French President Jacques Chirac prepared to address the nation on Monday over the worst urban violence in 40 years. (REUTERS/Regis Duvignau)

No Pasaran shares this news about the rioters today:

The problem is not that these Moslem kids are unemployed, but that they are unemployable. They are illiterate, unskilled except in crime, don’t speak French well, refuse to assimilate into French culture and think being Moslem is more important than being French. Worse, they are paid by the French welfare state not to work, living well off the dole (and crime). The problem was epitomized by these words of a young Moslem rioter to a French reporter: ‘In the day we sleep, go see our girlfriends, and play video games. And in the evening we have a good time: we go and fight the police.

That does not sound so good. It looks like a few more (thousand) cars may go up in flames before this is over.

Jim Hoft
Jim Hoft is the founder of The Gateway Pundit, one of the top conservative news outlets in America. Jim was awarded the Reed Irvine Accuracy in Media Award in 2013 and is the proud recipient of the Breitbart Award for Excellence in Online Journalism from the Americans for Prosperity Foundation in May 2016.
Party Leader Ocasio-Cortez Pushed to the Side at Democrat Convention -- But Lolita Express Frequent Flyer Bill Clinton Given Prominent Speaking Slot
War Room with Steve Bannon Holds Special on "The Case for Hydroxy" 10 AM to Noon Eastern -- Live Video
NYC Street Artist Paints Thin Blue Line on Street in Support of Police -- Gets Cease and Desist Letter from NYC Officials (VIDEO)
DEVASTATING! Trump Responds to Junk Intel Report - "Nobody with Any Common Sense" Would Say Russia Wants Donald Trump to Win (VIDEO)
Portland Mayor Ted Wheeler Now Begs Criminal Antifa Terrorists to Stay Home So Trump Won't Use His Failed City in His Ads (VIDEO)
See more...