France’s storm of rioting eased Wednesday, with car burnings falling nearly by half, police said. But looters and vandals defied a state of emergency with attacks on large stores, a newspaper warehouse and a subway station. 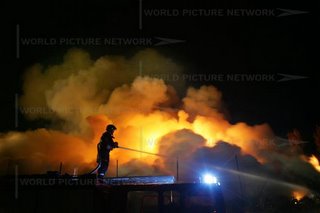 A French firefighter fights a huge fire in a recycling centre in the industrial area of Gonnesse, near Le Blanc Mesnil, north of Paris on Sunday, Nov. 6, 2005. The fire was started by rioting teenagers as social riots erupted in many of the poor suburbs of Paris, spreading throughout urban France. More than 4,000 cars were burned in twelve days. (WPN)

HOTSPOTS: Some 300 districts affected at the height of the riots, particularly the outer Parisian suburbs of Clichy-sous-Bois, Aulnay-sur-Bois, Saint-Denis and Grigny.

Regional cities hardest hit include Evreux, west of Paris, Lille in the north, central Saint-Etienne and Toulouse in the southwest.

Other outbreaks have occurred in Nice, Marseille, Nimes, Montpellier, Perpignan and Pau in the south; Bordeaux, Nantes and Rennes in the west; Clermont-Ferrand, Tours and Lyon in central France; Rouen and Le Havre in Normandy; and Strasbourg to the east.

Some 11,500 police and gendarmes have been mobilised throughout the country. Seven helicopters deployed in the Ile-de-France region encompassing Paris.

More than 115 residents, police and fire fighters injured. A firefighter sustained serious facial burns from a Molotov cocktail and a handicapped woman was badly burnt when youths set fire to a bus.

A rioter lost a hand attempting to throw a tear-gas canister back at riot police.

A female reporter with a South Korean television crew was kicked unconscious, and Italian and Russian journalists were attacked while reporting on the violence.

UP IN SMOKE: More than 6,600 vehicles torched and dozens of buses, schools, gymnasiums, nurseries, libraries, shops and businesses destroyed in arson attacks.

INSURANCE BILL: Damages bill estimated to run into hundreds of millions of euros (dollars). Insurers say the average payout for a car is 3,000 euros (3,500 dollars) but not all will qualify for compensation.

ARRESTS: Police have made 1,800 arrests, the youngest aged 10. One third have been released without charge and courts have handed down jail terms to 173 offenders.

Six people aged 17 to 22 were arrested Wednesday as part of an investigation into shots fired Sunday at police in Grigny, on Paris’s southern outskirts.

Kirk H. Sowell has an extensive post up at Publius Pundit looking at the situation in France from all angles.