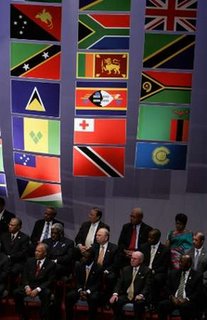 Australian Prime Minister John Howard (2nd R, front) attends the opening ceremony of the Commonwealth Heads of Government Meeting (CHOGM) in Valletta November 25, 2005. Concerns about democracy in Uganda threatened to overshadow Friday’s start to a three-day Commonwealth summit which leaders hope will give a push to next month’s world trade talks aimed at reducing poverty. Queen Elizabeth opened the talks at a gala ceremony on the Mediterranean island of Malta where Uganda’s President Yoweri Museveni sat with British Prime Minister Tony Blair and other leaders from the 53 mostly ex-British Empire countries. (REUTERS/Chris Helgren)

The 53 countries of the former British Empire that comprise the Commonwealth, pushed fair trade at their talks this weekend:

A BBC correspondent says the message was aimed mainly at the EU, which was criticised for keeping farm subsidies.

The leaders voiced deep concern about the pace of trade negotiations.

The statement, issued on the second day of a three-day summit, urged developed countries to show the “political courage and will” to be flexible on trade, “as their own longer term prosperity and security depends on such an approach”.

Prime Minister Tony Blair of Great Britain warned the countries at the conference about the importance of a fair trade deal:

Commonwealth leaders pressed world powers on Saturday to make the concessions needed for a deal on world trade as they sought to find a joint position and overcome huge disparities in their nations’ size and wealth.

Leaders of the 53 countries, most of them former British colonies, spent a large part of the day in an informal retreat where they focused on trade after Uganda’s internal problems overshadowed the start of the three-day meeting.

British Prime Minister Tony Blair warned of disaster if no deal was secured at Hong Kong’s December summit where world nations will try to hammer out a deal to boost world trade and lift millions of people out of poverty. 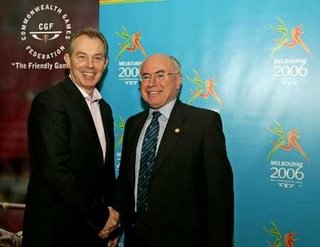 British Prime Minister Tony Blair (L) and Australian Prime Minister John Howard shake hands after a sports breakfast organised by the Commonwealth Games Federation during the Commonwealth Heads of Government Meeting (CHOGM) at the Radisson Golden Sands Resort in Ghajn Tuffieha, outside Valletta, November 26, 2005. The Australian city of Melbourne is hosting the next edition of the Games in 2006. (REUTERS/Darrin Zammit Lupi)

The Queen of England opened the meetings on Friday.