The loud “Boos” at the Annual Grey Cup Title Game were just the start of a lousy week for Canadian Prime Minister Paul Martin. 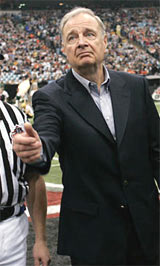 Prime Minister Paul Martin takes part in the opening coin toss at the start of the CFL Grey Cup on Sunday in Vancouver where he was booed loudly. (CP / Adrian Wyld)
(Hat Tip Kate at Small Dead Animals)

No love for the Prime Minister on Sunday… (at least he didn’t pitch one in the dirt!!)

The teams battled at Vancouver’s B.C. Place stadium. The Grey Cup week festivities had been termed The Party on the Pacific.

Gov. Gen. Michaelle Jean got a warm greeting from the crowd of 59,195, but when Prime Minister Paul Martin stepped on the field, there were resounding boos.

Martin conducted the coin toss to determine first possession in the game. The Eskimos lost.

Evidently, it was not the first booing for the Prime Minister:

Prime Minister Paul Martin was booed at a sold-out rock show by thousands who have sided with U2’s Bono, a rock star who won’t let Canada beg off the fight to end poverty.

Bono has been speaking out against the embattled leader for breaking a promise to raise Canada’s spending on foreign aid. (April 29)

And, it led into a disastrous Monday for the Liberal Prime Minister as Captain’s Quarters announced yesterday:

‘This Government Has Lost The Moral Authority To Govern’

The Canadian Parliament approved a historic no-confidence motion against the Liberal executive in Ottawa this afternoon, dissolving the government and forcing elections weeks after the Gomery Inquiry issued its first comprehensive report on the Liberal corruption in the Sponsorship Program:

The short-lived 38th Parliament met its demise on Monday night, setting the stage for one of the longest election campaigns in two decades, as the Liberal government was defeated in a no-confidence vote at the hands of all three opposition parties and the country was launched into official election mode.

The Liberals lost the vote in the House of Commons 133 to 171, beginning a series of events that will propel voters toward the ballot boxes, likely on Jan. 23.

I’m listening to the aftermath on CPAC, where the Liberal apologist wants to tell Canada that Adscam involved “a few Liberals”, but that “no one believes that it involved the party as a whole”. That apparently will be the line that the Liberals take in this election, along with a scolding tone about all of the great work that the Commons could be doing instead of holding another election seventeen months after the last one.

The Captain is correct (again) as Martin whines about the January elections in his above speech and tells how the money used on the elections could be put to better use elsewhere.

Captain’s Quarters needs to be congratulated on bringing the corruption of the liberal Canadian Government into the light of day. Ed Morrissey of Captain’s Quarters deserves credit for bringing down the Candadian government, by breaking the publication ban on the Gomery investigation. (via Instapundit) It could be argued that without Captains Quarters, the dissolution of the government yesterday may have likely never happened.

Elections will be held on January 23rd.