You all have heard about CNN’s X-Out of Vice President Dick Cheney during his powerful speech on Monday. CNN said it was an accident. 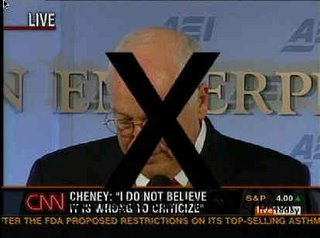 Michelle Malkin’s readers were not so quick to dismiss it as “just a glitch”.
Gina Cobb said the explanation by CNN is not plausible.

Definitely Not Fair or Balanced

Now, today, Bill Quick at Daily Pundit has the incredible story of a viewer calling into CNN and asking for an explanation and was treated horribly. The viewer was even told to “Tell the President and Vice President to Quit Lying!”

BUT… CNN did not expect the call to be recorded!

Daily Pundit has the damning recording.

Real Teen- Right on the Right has the story.

An independent media firm confirmed this morning that the call recording was authentic:

When the founders of the company, Preska Thomas and Kevin Finn, made contact with the network, to their surprise they were bullied and harassed in the same way by the Headline News desk. Callers were repeatedly told by CNN, “Tell the President and Vice-President Dick Cheney to stop lying.” Team Hollywood’s conversation with the newsdesk was recorded. When the tape is played back, amongst political statements being made by the network were the words that the “X” was intentional, as an act of free speech by CNN.

CNN was caught off-guard at the company’s headquarters in Atlanta by the recording. The statements that were made through their Headline News desk are not acceptable and there are calls on the Internet for investigation by the FCC, the FBI and the Trilateral Commission.

CNN may want to lay off the President for awhile. They wouldn’t want to be put on Bush’s hit list of target media outlets… like The New York Times and the Washington Post, not the bogus Aljazeera story that is under investigation.

(Pajamas Media has more on the Daily Mirror Splash.)

It looks like CNN is setting up to be this year’s “Holiday Turkey”!