Here is the story of former Marine Sgt. Jimmy Massey as printed in the St. Louis Post Dispatch today. He has been out traveling with Cindy Sheehan on her bus tour across the country. Jimmy is a member of Veterans Against the Iraq War. Jimmy traveled to France where they reprinted his anti-war story. Florida Democrat Frank Gonzalez protested with Jimmy in August.

But, Jimmy Massey really needs to be behind bars! Once you read the gory, hateful details you will agree.

You can hear Jimmy Massey in his own words in a podcast, HERE.
And, HERE is Jimmy and Cindy in a video together warning parents about the evils of military recruiters.

Jimmy says in the video, “When I became a recruiter they told me to lie to cheat.”
But, look who the real liar is! 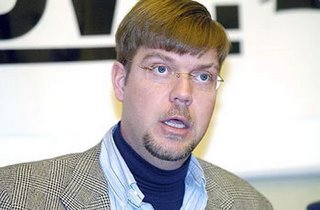 This picture of Jimmy is from Free Republic.
USA TODAY carried a story told by Jimmy on 3/20/05. He later traveled with Cindy Sheehan on her way to Washington DC this fall.

For more than a year, former Marine Staff Sgt. Jimmy Massey has been telling anybody who will listen about the atrocities that he and other Marines committed in Iraq.

In scores of newspaper, magazine and broadcast stories, at a Canadian immigration hearing and in numerous speeches across the country, Massey has told how he and other Marines recklessly, sometimes intentionally, killed dozens of innocent Iraqi civilians.

Americans shot a 4-year-old Iraqi girl in the head.

A tractor-trailer was filled with the bodies of civilian men, women and children killed by American artillery.

Massey’s claims have gained him celebrity. Last month, Massey’s book, “Kill, Kill, Kill,” was released in France. His allegations have been reported in nationwide publications such as Vanity Fair and USA Today, as well as numerous broadcast reports. Earlier this year, he joined the anti-war bus tour of Cindy Sheehan, and he’s spoken at Cornell and Syracuse universities, among others.

News organizations worldwide published or broadcast Massey’s claims without any corroboration and in most cases without investigation. Outside of the Marines, almost no one has seriously questioned whether Massey, a 12-year veteran who was honorably discharged, was telling the truth.

Each of his claims is either demonstrably false or exaggerated – according to his fellow Marines, Massey’s own admissions, and the five journalists who were embedded with Massey’s unit, including a reporter and photographer from the Post-Dispatch and reporters from The Associated Press and The Wall Street Journal.

You can read his whole lying story in the St. Louis Post Dispatch article HERE.

And the Post Dispatch has another article questioning why the press was so eager to run Massey’s stories.
Hmmm. The real question is why the PD ran this story? It is completely out of character.

Jimmy Massey is the lowest of the low. 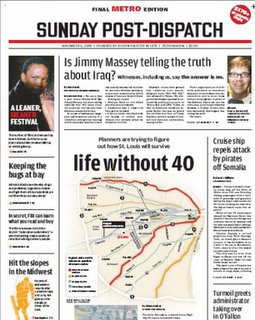 This was an impressive move by the St. Louis Post Dispatch putting this investigative piece on its front page today! Could this be because of the new editor?

Michael Moore posted an article about Jimmy on his website.

Here Jimmy says that there was a Congressional investigation brought up against him.

Here Jimmy says a child whose home had been bombed died in his arms.

Glenn Reynolds, the Instapundit, noticed something was up with Jimmy Massey last year!

Michelle Malkin rightfully suggests sending a note to Ron Harris at the St. Louis Post Dispatch to thank him for shedding some light on this story… a great idea!

Lori Byrd at Polipundit is not impressed with his book, “Kill, Kill, Kill”. Agreed!
Austin Bay notes “More Fraud from the Appeaseniks”.
Texas Rainmaker asks, “Really, who does this surprise?”

Glenn Reynolds is on the story again today.

Update: (Monday 11-7-05 AM) Michelle Malkin will not let the story die. She has a big update this morning. LGF also has an update and wrote about Massey back in December.

Update 2: Jimmy Massey and John Kerry have too much in common!