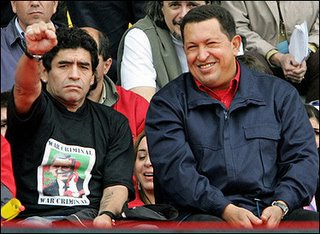 Maradona appeared on Cuban television (for the Cubans who have electricity!) with Fidel and promised to lead the march against President Bush in Argentina:

Argentine soccer hero Diego Maradona promised Cuban President Fidel Castro on Thursday he would be at the front of an anti-Bush march in Argentina next week.

U.S. President George W. Bush will attend a summit of leaders from all countries from the Americas — except Cuba — in Mar del Plata, Argentina, Nov. 4-5.

“I think Bush is a murderer. … I’m going to head the march against him stepping foot on Argentine soil,” Maradona said, appearing on Cuban television with Castro.

“I promised the ‘Comandante’ that I would do it and I will,” the 44-year-old football legend said, referring to Castro.

“For me he is a god,” Maradona said of the 79-year-old left-wing Cuban leader, whom he considers a friend and a father figure who helped him kick drugs.

Actually, Maradona did not lead the march or participate in the march, but he did lead fellow Marxists, including Hugo Chavez, at the stadium in the Bush Bashing.

The leftists who joined Maradona on the train to Mar da Plata, Argentina look a lot like American Leftists!!

Those Marxists and anarchists who joined Chavez and Maradona at the stadium screamed wildly for President Bush to “Go Home” and later went downtown and trashed the city center.

And, America’s own Liberals couldn’t be more pleased about the whole situation! It gave them an opportunity to say things like “Embattled Bush has Rocky America’s Summit”. Leftists in America couldn’t control themselves and sided with the Marxists in some good Bush-Bash fun!

To American Democrats, it doesn’t matter that the protesters were Marxists. So, why then doesn’t their media report this? The New York Times continued its long history of communist sympathizing with a report that does not mention once that the rioters were “communists” but does describe them as “peaceful protesters”!

As long as they’re Bush Bashers they are the partner and friend of the American Liberal. It doesn’t matter if they are Marxist, anarchist, etc. They still fit comfortably under the all-inclusive liberal-Thinking umbrella!