JIMMY CARTER SAYS DECISION TO GO TO WAR IN IRAQ WAS MADE LONG BEFORE 9-11 EVER HAPPENED,
VIDEO HERE

Carter accused President Bush of degrading moral standards in an interview on Wednesday:

“In the last five years there has been a profound and radical change in the basic policies or moral values of our country,” said Carter, a Democratic Party president who served between 1977 and 1981.

“This is just one indication of what has been done under this administration to change the policies that have persisted all the way through our history.” 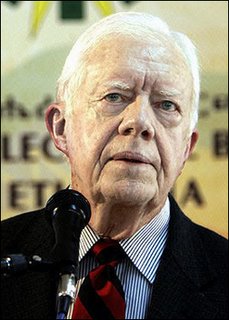 Today, Jimmy Carter says that the Bush Administration decided to go to war in Iraq long before 9-11 ever happened!!

In an interview with The Early Show co-anchor Rene Syler, Mr. Carter suggests the war in Iraq stems in part from a significant departure from previous moral values in America.

“I think it’s about time that a thorough and complete and public explanation be given for the reasons that we went to war in Iraq,” he tells Syler. “And for the last 18 months, the Republicans have been concealing these facts and refusing to go forward with an investigation which they promised the Democrats in the intelligence committee a long time ago.”

“So, I think it’s completely justified for the Democrats to insist that the investigation be pursued, that it be completed, and that the results be made known not only to the Senate, but also to the public in America.”

“We need to understand what this administration has done, why we went to war in Iraq, when obviously all the reasons they gave were false, and let the people understand — was it a deliberate distortion of the facts as they knew them? Or were they mistakes made honestly? Who was culpable, if anyone?”

“Going into Iraq was ill-advised and unjust and unnecessary, which makes it even more heroic for the young men and women to go over there and serve our country,” he says. “Last month in October, we had 92 of our young people killed in Iraq.

“It would be inadvisable at this moment just to withdraw all of a sudden, but this administration has never said that even 50 years from now or 10 years from now, whatever, that we are gonna dismantle all our military emplacements in Iraq.

Mr. Carter says the decision to go was made long before 9/11.

“I think it was made long before President Bush was elected president,” he says, “and the people that believed that America should be the dominant force in the world, unilaterally, acting militarily if necessary, is another basic change in the principles that have always guided our country and made us great.”

“So, going to war without our county being directly threatened is a new policy that’s radically changed the basic moral values and ethical standards of the United States of America.”

Here is an earlier post on Jimmy Carter slamming the GOP during interviews for his new book. What more can you say?

In an interesting move at USA TODAY, the mainstream newspaper finally noticed that Carter is breaking precedent with his comments.