President Bush did not mince words at his press conference today in South Korea when asked about Dick Cheney’s remarks from yesterday. 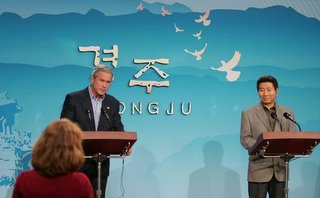 President George W. Bush and Moo Hyun Roh, President of the Republic of Korea, listen to a question from a reporter Thursday, Nov. 17, 2005, during a joint press availability at the Hotel Hyundai in Gyeongju, Korea. (White House photo by Paul Morse)

President Roh had this to say:

With regard to the North Korea nuclear issue, we reiterated that a nuclear-armed North Korea will not be tolerated, and reaffirmed that the issue should be resolved through peaceful and diplomatic means. In order to implement the September 19th joint statement of the six-party talks, Korea and the U.S. agreed to work closely together. We especially felt that the second phase of the fifth round of six-party talks should be held as soon as possible in order to find a breakthrough in resolving the nuclear issue.

Question: Mr. President, Vice President Cheney called it reprehensible for critics to question how you took the country to war, but Senator Hagel says it’s patriotic to ask those kinds of questions. Who do you think is right?

PRESIDENT BUSH: Well, look, ours is a country where people ought to be able to disagree, and I expect there to be criticism. But when Democrats say that I deliberately misled the Congress and the people, that’s irresponsible. They looked at the same intelligence I did, and they voted — many of them voted to support the decision I made. It’s irresponsible to use politics. This is serious business making — winning this war. But it’s irresponsible to do what they’ve done. So I agree with the Vice President.

PRESIDENT BUSH: I think people ought to be allowed to ask questions. It is irresponsible to say that I deliberately misled the American people when it came to the very same intelligence they looked at, and came to the — many of them came to the same conclusion I did. Listen, I — patriotic as heck to disagree with the President. It doesn’t bother me. What bothers me is when people are irresponsibly using their positions and playing politics. That’s exactly what is taking place in America.

And, the GOP website pointed out Senator Harry Reid’s flip-flopping on his position on Iraq on Wednesday.

In Case You Missed It: “I Think It’s A Lie To Say The President Lied”

Musing Minds has a “No Confidence” vote in on Terry McCauliffe’s interview on FOX News earlier today.

Lorie Byrd and the Polipundit readers are deciding if this is just a phase or will the Republicans continue to blast away.