Sick ducks in Canada are being tested to see if they have the deadly H5N1 strain. 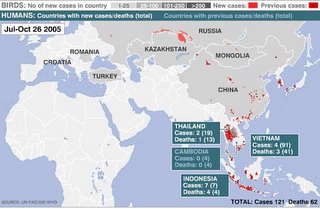 Map shows spread of deadly bird flu across the globe. Canada is testing sick ducks to see if they carry the deadly strain. (BBC)

Canadian ducks are found with bird flu. Experts are testing the strain to see if it is the deadly H5N1 variety of the flu:

Nearly three dozen wild ducks have tested positive for the H5 bird flu virus in Canada, officials reported Monday, but they said it was unlikely to be the strain blamed for more than 60 human deaths in Southeast Asia.

Dr. Jim Clark of the Canadian Food Inspection Agency said it would take at least a week to determine whether the flu found in 33 ducks from the provinces of Quebec and Manitoba was the deadly H5N1 strain that has ravaged Asian poultry farms.

But it was unlikely to be the same strain because none of the wild ducks tested was ill, he said at a news conference.

“That strain in Asia has caused high mortality in those birds; the birds that tested positive in Quebec and Manitoba are all healthy,” Clark said.

Asian Paciific countries are staging a mock outbreak after the outbreak earlier in the year:

Countries across the Asia-Pacific region coping with an outbreak of bird flu plan to stage a mock disease outbreak next year to gauge how well they would respond to a pandemic or other major health threat, an Australian official said Tuesday.

The exercise is expected in the first half of next year and will try to identify major weaknesses in preparedness and coordination, Doug Chester, Australia’s ambassador to the Asia Pacific Economic Cooperation forum, said at the end of a two-day meeting of disaster coordination experts. He did not give any details on the plan, but indicated it would focus more on strategy than field exercises.

“There is an element of scare-mongering that is undermining effective planning in some economies, and it’s causing unnecessary economic damage to some economies,” Chester said.

He said poultry and tourism industries in some APEC countries were already feeling the pinch.

A Drumstick to Nowhere?

President Bush is outlining a strategy today to battle the next flu pandemic.

President Bush proposed a $7.1 Billion strategy to fight the bird flu today in his speech and said that officials are working on a plan to combat an outbreak.

China says it is at the forefront in vaccine development.

Japan and the US have found a faster way to make the vaccine.

Chiron won a $62 million contract from the U.S. Health and Human Services Department (HHS) to produce millions of doses of vaccine against the H5N1 strain of bird flu, it was announced last week.