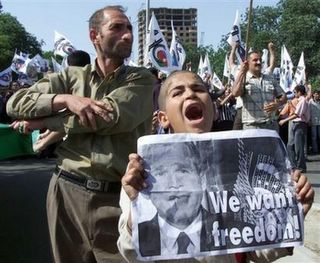 A young protester sent a strong message to President Bush back in June!

Azerbaijan faces a critical test of democratic reform this weekend as hundreds of candidates are vying for 125 seats in parliament.

Azerbaijan goes to the polls on 6 November in the first parliamentary elections in the country since November 2000 and the first major national poll since the election of Ilham Aliyev as president in October 2003. At stake are the 125 seats in the Milli Meclis, or National Assembly, and Azerbaijan’s reputation as an aspiring democracy.

Azerbaijan does not have a strong track record for holding free and fair elections. Since September 1996, international monitors have assessed every poll to be less than free and fair. Gerard Stoudmann, then director of the OSCE’s Office for Democratic Institutions and Human Rights, unofficially characterized the November 2000 parliamentary elections in Azerbaijan as “a crash course in various types of falsification.”

In many respects, the outcome of the vote will be a judgment on his record in office. President Aliyev has repeatedly asserted that he sees his country’s future with Europe and has welcomed Azerbaijan’s inclusion, together with the two other South Caucasian states, Armenia and Georgia, in the European Union’s New Neighborhood Policy.

But the EU is losing patience with the slow pace of reform in Azerbaijan and the country’s shaky democratic credentials. EU External Relations Commissioner Benita Ferrero-Waldner told the European Parliament on 26 October that the Azerbaijani government was violating basic political freedoms in the run-up to the elections. The conduct of the elections, she said, would be a litmus test of the country’s will to bring itself into line with the EU. 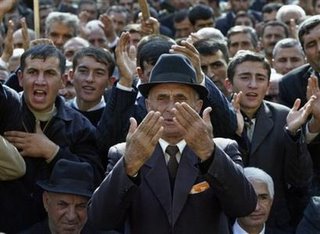 Candidates have alleged threats during the run up to the election and one quarter of them have withdrawn from the election.

At this time, the Opposition in Azerbaijan has “no revolutionary scenarios” for the post-election period in the country.