Update: (Monday AM) Ace of Spades says there is 30% (?)chance that al Zarqawi is dead.

The US is waiting on DNA test results.

And, I found more description of the attack earlier today:

Joint forces backed by US military helicopters had surrounded the house after receiving a tip that Zarqawi might be inside, the governor of Nineveh province, Duraid Kashmoula, said on Saturday.

Four of the fighters were killed during the intense air and ground assault and three others blew themselves up with explosives rather than be captured, Mr Kashmoula said.

A woman was also found in the house with the words “suicide bomber” marked on her chest, officials said. The Mosul police commander, Brigadier-General Said Ahmed Jubouri, said the force of the suicide blasts destroyed the house.

Fierce resistance on such a scale often indicates the presence of a senior insurgent, and US intelligence officials said earlier this year that Zarqawi – the leader of al-Qaeda in Iraq responsible for many suicide attacks in Iraq – had vowed not to be taken alive.

Mr Kashmoula said US officials were investigating whether Zarqawi was among the dead, but were awaiting the result of DNA tests.

The Jawa Reports that the Left is rejoicing that Zarqawi may still be alive.

Rumors and reports that Al Zarqawi is dead:

Little Green Footballs has the news:

At least one Arab television media outlet reported that Abu Musab al-Zarqawi, the head of the al-Qaida in Iraq, was killed in Iraq on Sunday afternoon when eight terrorists blew themselves up in the in the northern Iraqi city of Mosul. 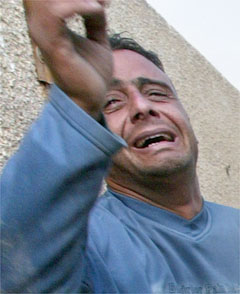 A man cries as the coffin of his mother, killed by a car bomb explosion at a market, is carried outside a hospital in Baghdad, Iraq, Saturday. (AP/Khalid Mohammed)

Earlier today it was reported that Al Zarqawi’s family had renounced him.

On Saturday, Jordanians were defiant to Al Zarqawi’s threats:

Jordanians, even Muslim extremists, reacted defiantly Saturday to threats by Iraq’s Al-Qaeda leader to attack more targets in their country and to kill their king. An audiotape purportedly from Abu Musab al-Zarqawi on Friday warned of further attacks against hotels, tourist sites and military bases in Jordan and threatened to kill King Abdullah II.

Not a good weekend for the serial killing head chopper!

The OSM has more.

The Jawa Report has more on the incident today that killed 8 Al Qaida in Iraq.

Update: (3:15 PM CST) Iraq the Model have much more on this rumor. The brothers say he is probably dead!

AP is now carrying the story:

U.S. forces sealed off a house in the northern city of Mosul where eight suspected al-Qaida members died in a gunfight — some by their own hand to avoid capture. A U.S. official said Sunday that efforts were under way to determine if terror leader Abu Musab al-Zarqawi was among the dead.

The official spoke on condition of anonymity because of the sensitivity of the information.

American soldiers maintained control of the site, imposing extraordinary security measures, a day after a fierce gunbattle that broke out when Iraqi police and U.S. soldiers surrounded a house after reports that al-Qaida in Iraq members were inside. Three insurgents detonated explosives and killed themselves to avoid capture, Iraqi officials said. Eleven Americans were wounded, the U.S. military said.

Here is a city map of Mosul where the explosion occurred. 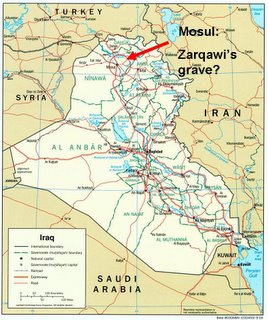 Mosul, Iraq, is where the explosion occurred today.

US forces have had success capturing Saddam’s Fedayeen henchmen in the Al Sukar neighborhood of Mosul in earlier raids.