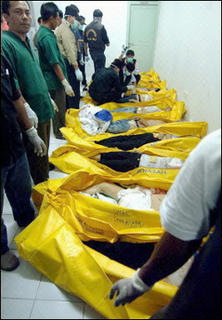 Hospital workers and police try to identify victims killed in a series of bomb blasts on Bali island. World leaders condemned a wave of attacks by suspected suicide bombers on Bali that left at least 26 people dead and pledged to support Indonesia in its fight against terrorism.(AFP)

The restaurant bombers are linked to Al Qaida:

“The terrorists are still looking for soft targets,” President Susilo Bambang Yudhoyono said at a press conference after touring the devastated areas on the Indonesian island.

He also said Indonesia, the world’s most populous Muslim nation, will do everything it can to prevent another strike.

They are also accused of orchestrating the 2002 Bali nightclub bombings, as well as two other attacks in the Indonesian capital in 2003 and 2004. The nightclub bombings, which also struck venues crowded with tourists on a Saturday night, killed 202 people, most of them foreigners.

More on the Bali Blasts HERE.