California Conservative and Michelle Malkin are reporting on the fine union representatives attacking a lone demonstrator in California:

Opponents tried to hit her with their signs and some blocked news cameras as she argued her point. The crowd turns quickly, grabbing her signs and tearing them up. Even a woman wearing an orange security vest rips up the “Vote Yes” signs.

Political Teen has the video.

The Union Thuggery in California is reminiscent of scenes from last year’s election rallies. 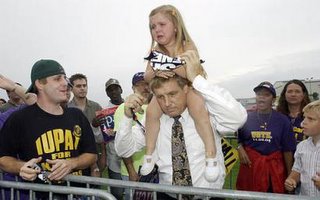 Sophia Parlock, 3, cries while seated on the shoulders of her father, Phil Parlock, a supporter of President Bush, after a Bush-Cheney sign she and her father were holding was torn up by another person standing in the crowd that had gathered to greet Democratic vice presidential nominee Sen. John Edwards, D-N.C. (AP)

Democrats and a few conservatives lambasted Phil Parlock for putting his child in this situation (not the first time) rather than correctly blame the violence on the thugs from the Painter’s Union IUPAT. Some Democrats wanted sdesperatelyly for the whole story to be a hoax but Michelle Malkin talked to the father, herself.

And, just this week the AFL-CIO made a grand push for new members. It’s hard to imagine this California story will help the cause out much.