Image from Al Qaeda Weekly News with a picture of Al-Jazeera reporter Aluni in the background. 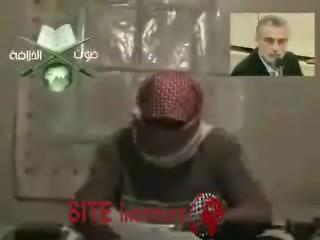 “The Voice of the Caliphate,” on September 28, 2005, put out a special news bulletin concerning the sentencing of Taysir Alluni, an al-Jazeera journalist, by a Spanish court. The video, 1:35 minutes in length, reports on the guilty judgment and seven year prison sentence handed down to Alluni and denounces the way the Spanish “infidel, crusader courts” ruled against the Muslim journalist. (SITE)

Al Qaeda released its latest edition of the “Caliphate News” this week covering the global jihad from Niger to Iraq and beyond:

In the second edition of “a nation’s weekly harvest” the anchor of the “Voice of the Caliphate” channel — a hoodded gunman with an automatic weapon at his side — took his audience from Palestine to Afghanistan and then to Iraq..

Four million people were threatened by starvation and disease in Niger because they were neither Christians nor do they have oil, he said in the 20-minute footage.

The Al-Saud and Al-Sabah, the ruling families of oil-rich Saudi Arabia and Kuwait, were too busy making donations to save the victims of Hurricane Katrina in the United States, he claimed. The bulletin is a production of the Global Islamic Media Front, which begins with footage of the capture and ultimate execution of a Zionist intelligence operative by Palestinian militants. The Ezzedine al-Qassam Brigades, Hamas’s military wing, claimed responsibility on September 27 for the kidnapping and killing of an Israeli settler, describing him as an agent of Israel’s homeland spy agency, Shin Beth.

“This is the least they deserve,” said the reader. In Afghanistan, Taliban spokesman Abdul Latif Hakimi claimed the suicide attack which killed nine members of the Afghan army on the outskirts of Kabul, said the bulletin, apparently prepared before Pakistan announced Hakimi’s arrest.

This bulletin also makes clear the infiltration of Al Qaeda into Palestine that has been talked about.