Today there was a significant amount of terrorism news…

The Bali blasts of 2002 were remembered today by relatives of the 202 who were killed in the blasts.

The bombing of the USS Cole is remembered today on its 5th Anniversary.

The FARC terrorists in Columbia attempted a car bombing today.

Another suicide blast kills innocents in Iraq as the election nears.

The Zawahiri letter is revealed and explained.

That’s why this story was just so very special… 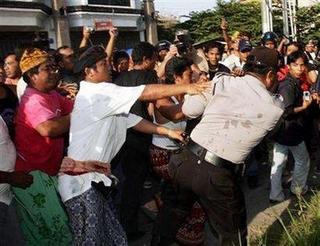 A senior police officer is pushed outside the Kerobokan prison as Balinese protesters demanded the immediate execution of those convicted of the 2002 nightclub bombings in Kuta on the Indonesian resort island of Bali October 12, 2005. (Reuters)

1,000 protesters stormed the prison where the Bali bombers were being held and demanded their execution!

The angry demonstrators at Denpasar’s Kerobokan jail managed to remove the prison’s main steel door from its hinges but police stopped them getting inside, an AFP correspondent reported on Wednesday.

“Kill Amrozi, kill Amrozi!” the crowd yelled, referring to one of three people sentenced to death by firing squad for the 2002 nightclub bombings which killed 202 people.

Amrozi and the other two on death row, Imam Samudra and Mukhlas, had been transferred the previous day to a high-security island prison off neighbouring Java island following earlier angry protests.

The confrontation was temporarily defused by the arrival of a group of traditional musicians from a nearby village, who positioned themselves between police and protesters.

But the shouting, drum-beating crowd had not yet dispersed.