Germany gets its first female Chancellor today in Angela Merkel, as Gerhard Schroeder finally decided to step down and abandon his Social Democrat Party. 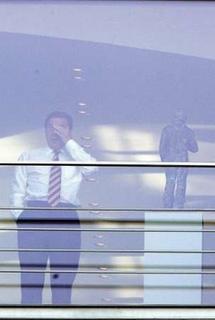 German Chancellor Gerhard Schroeder stands at a window of his office in the Chancellery after he left a party board meeting of the Social Democratic Party (SPD) in Berlin October 10, 2005. Schroeder told a meeting of his Social Democrats (SPD) October 10, 2005, that he would not play a role in the country’s next government, sources who attended the meeting told Reuters. Schroeder, who has led Germany since 1998, agreed to step aside on Monday in favour of conservative leader Angela Merkel, party sources said. (Reuters)

German Chancellor Schroeder made it clear today that it was not about the Social Democrat party… It was all about Gerhard:

German Chancellor Gerhard Schroeder told a meeting of his Social Democrats (SPD) on Monday that he would not play a role in the country’s next government, sources who attended the meeting told Reuters.

“That is not what I have planned for my life,” the sources quoted Schroeder as saying.

Schroeder, who has led Germany since 1998, agreed to step aside on Monday in favor of conservative leader Angela Merkel, party sources said.

Angela Merkel is to become Germany’s first woman chancellor under a deal agreed between her Christian Democrats (CDU) and the Social Democrats (SPD).
Mrs Merkel confirmed the deal at a news conference and said a CDU-SPD “grand coalition” would have to create jobs and push through economic reforms.

Under the deal, the SPD will take eight ministerial posts, against a reported six for the CDU and their CSU allies.

SPD leader Gerhard Schroeder will not be in the coalition, reports say.

Meanwhile, CNN has an interesting way of reporting on his historic unemployment numbers and economic stagnation of the German economy.

Funny, that the CNN article doesn’t mention the double digit unemployment rate, the largest since Hitler came to power. In fact the article doesn’t touch his horrible economic results at all.

So does 11% unemployment leave a “mixed legacy”? I wonder if CNN will be as kind to other world leaders when they leave office?