DELAY CODEFENDANT SAYS THERE IS A SIGNIFICANT RELATIONSHIP BETWEEN RONNIE EARLE AND GEORGE SOROS AND MARTIN FROST!
VIDEO HERE

These accusations of a Soros-Earle connection had been floating around for a while, but last night may have been the first time that one of the co-defendants publicly announced the relationship between Earle, Soros and defeated Democratic Congressman, Martin Frost.

John Colyandro, a codefendant with Tom Delay, says “There is a significant relationship between Ronnie Earle and George Soros, Martin Frost!” 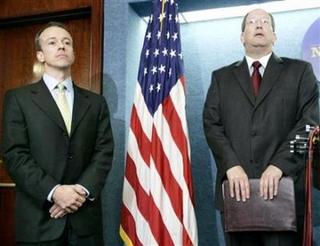 Colyandro: This District Attorney is wrong on the law and the facts.

The bill of indictments handed up against Mr Ellis, Mr. Delay and myself, are predicated on an imagined theory of activities number one, and number two, the law itself that he has indicted us on, does not even apply in this case…

Last week when our attorneys asked the District Attorney to produce what they claim to be evidence, they could not do so. And, that is very significant in this case.

Follow the Money has documented same day dollar for dollar donations, yet this attorney has singled out Tom Delay.

Ronnie Earle, first of all, is a partisan official and is doing this for political purposes. He was elected into office and is denying Tom Delay the right of Majority Leader.

Second, he has a personal agenda in that he thinks corporate money should be banned from elections. It is not his job to create the law but it is his job to interpret the law.

Earle specifically requested that for him to drop charges against Sears and Roebuck they would have to contribute money to a pet project. This is considered extortion under Texas Law.

Hannity: Are you going to aggresively seek out his emails, his phone records? I know that there have been steps in this direction already.

Colyandro: Two days ago we filed a motion of dismissal on outrageous conduct… That was our first step in finding out, who he’s affiliated with and who he’s been in contact with thoughout this investigation.

Hannity: And, who do you expect?

Colyandro: Well that’s difficult for me to say and it would be unfair for me to speculate. But, there are significant relationships here between George Soros, other public interest groups in the state of Texas and political acivists, and not to fail to mention even former Congressman Martin Frost (who lost his seat in the US House in 2004 after the Texas Redistricting Plan!!)…

FrontPage Magazine had a discussion last week on the “leftwing syndicate” or Soros Noise Machine that is backing the hysteria against Representative Delay.

DeLay’s most vocal accusers include a cluster of self-styled “ethics watchdog” groups, among which Common Cause, Democracy 21, Public Citizen, Public Campaign and The Campaign Legal Center have special prominence.

All of the above-named groups have received large contributions from Soros’ Open Society Institute. Common Cause has received $650,000; Democracy 21, $300,000; Public Citizen, $275,000; and Public Campaign, $1.3 million.(10) The Campaign Legal Center acknowledges on its Web site that it too has received “generous financial support” from the Open Society Institute as well as from other leftwing foundations.

The money trail strongly suggests that George Soros is implicated in the plot to frame Tom DeLay.

Before we allow a crooked county prosecutor to unseat one of America’s valued leaders, it behooves us to investigate further. We must demand of Mr. Soros what he and his hired retainers have long demanded of Tom DeLay — transparency and accountability.

No longer can we allow wealthy puppeteers to manipulate our government from the shadows. It is time to flood those shadows with light.

And… Flattorney has this to say on Ronnie Earle:

It’s important to remember that DA Earle didn’t have a case strong enough to indict DeLay. He admitted it, and that was our understanding from a well placed source, one week before DeLay got indicted the first time. Earle caved in to the Dems-Soros Mob, and one of Earle’s prosecutors quit over this fiasco last week.

According to Travis County Assistant District Attorney Rosemary Lehmberg (who has been subpoenaed by Tom DeLay’s attorney, Dick DeGuerin, re: prosecutorial misconduct – along with Ronnie Earle and another ADA), Earle single-handedly pushed forward the DeLay investigation over the objections of colleagues. “Ronnie was the only person in maybe a group of six or seven lawyers in a room who thought we ought to go ahead and investigate and look at those things,” Lehmberg says.

Free Republic describes the Soros money backing Earle and the “Real Scandal” that is brewing down in Texas. This is not good news for Ronnie Earle:

No, the scandal is not with DeLay, but rather with Ronnie Earle, the Travis County District Attorney who is prosecuting Earle.

The money in question comes from Texans for Public Justice. They claim to be a “non-partisan, non-profit policy and research organization which tracks the influence of money and corporate power in Texas politics. Texans for Public Justice is a vocal advocate for citizen rights, open government and corporate accountability in Texas.” In fact, they are viciously partisan, take money that has been laundered through left-wing groups (exactly what they have accused Tom DeLay of doing) and use it to attack conservatives in Texas and around the country. They want others to be open with their finances but are very secretive concerning their own finances.

Byron York, at National Review noted that George Soros was the driving force behind the “Take Back America” group from the last election:

At the meeting, which was dubbed the “Take Back America” conference, Soros was introduced
by Democratic Sen. Hillary Rodham Clinton, who told the crowd that “we need people like George Soros, who is fearless and willing to step up when it counts.”

Obviously, George Soros is still serious about taking America back!

And, how foolish we were to believe, that just last year we thought George Soros was off to the monastery!

Update: Tom Delay’s lawyer petitioned the court on Thursday. His lawyer Dick DeGuerin filed a motion late Thursday asked the presiding judge, Bob Perkins, to remove himself from the case. A separate motion requested that the trial be moved out of Austin, one of Texas’ most liberal cities.

WILLism’s has much more on this shameless fiasco by a leftist philanthopist, leftist ex-politicians, leftist organizations, a leftist prosecutor, leftist film-makers and a leftist judge.

Musing Minds has Tom Delay’s statement from today and it was good! Tom Delay is no patsy.

The Right Place believes Ronnie Earle may not be through with his indictments just yet.