MICHAEL STEELE MAKES HIS BIG ANNOUNCEMENT,
“I AM CERTAIN. IT IS TIME!”
VIDEO HERE

I am certain it is time for met to run for US Senate. For too long one party worried more about prices in the stock market than prices in the corner market. And, too many in the other party, preached reconciliation at the same time they practiced division. (Applause) The gap, the gap between Washington and our families is real! 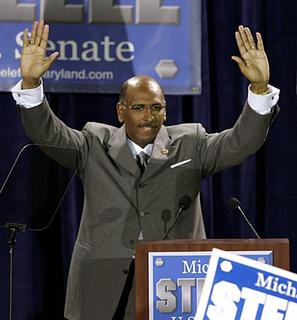 Lt. Gov. Michael S. Steele gestures to the crowd after announcing his candidacy for the U.S. Senate today in Largo. (AP)

From rags to riches, the popular Lt. Gov. Michael S. Steele made his announcement today to run for United States Senator from Maryland:

“With freedom at stake around the world, with our country torn at home between extremes of left and right, with our families straining under deficits in take-home pay and deficits in get-home time, there is no doubt in my mind about what is right,” Steele said.

“It is time to heal our divisions. It is time to empower people, instead of empowering government. It is time to change the culture in our nation’s capital, and that’s why I’m certain it’s time for me to run for the United States Senate,” Steele said to the roar of the crowd.

Paul at Powerline, a Maryland native, says that this makes for an interesting Senate race.

But, since racism is OK is as long as you are on the Left, some Democrats are already attacking Lt. Governor Steele with vile racial slurs!

Simple Sambo wants to move to the big house. This picture is titled “Mantan”!

This attack from The News Blog (Via FrontPageMag.com) was already posted this morning! Here is what this Democrat blog says of Steele:

And if he thinks he can win Baltimore and the DC suburbs, he’s on crack. Black people will not only not vote for him, but regard him with contempt. When he said it was no big deal that Ehrlich held an event in a restricted country club, he showed himself to be Simple Sambo, untrustworthy and unreliable. Now, his bossman’s people look like they’re gonna let him sink, not swim.

When your boss’s money people are laughing at you in print, well, Simple Sambo has a long way to go.

Robert George has more on the attacks on Michael Steele.