Dog Pundit sent this news of the democracy protests in the village Kaishi and the disturbing death of one of China’s Democracy activists.

The Guardian on Sunday wrote about the very brutal death of Chinese democracy activist Lu Banglie on Saturday night in a village in southern China:

The last time I saw Lu Banglie, he was lying in a ditch on the side of the street – placid, numb and lifeless – the spit, snot and urine of about 20 men mixing with his blood, and running all over his body.

Mr Lu spent his adult life working to empower villagers and to get the attention of Beijing and the world. He was beaten up many times, had scars all over his body. This, he thought, was part of his work.

The last words of Mr Lu I wrote down were: “The police cover their arses. They employ all these thugs whose lives mean nothing to them to kill you. That’s why once we are in this we can’t go out.”

A Chinese activist was missing on Sunday after being badly beaten when he and a foreign journalist went to a village in southern China, other activists and friends said.

They said Lu Banglie and Benjamin Joffe-Walt of the Guardian newspaper in Britain were stopped by a group including people in police and army uniforms and about 30 in plainclothes when they neared Taishi village in Guangdong province on Saturday night.

Taishi has become a test case for local-level democracy in China since villagers launched a campaign in July to eject the elected village chief, suspecting him of embezzling public funds in a deal involving the sale of a large tract of village land.

Here is more about the surprising democracy developments coming from a tiny village in China that is just now starting to draw more international attention. This article talks about recent developments in China starting with local village elections:

China, where the Communist Party has enjoyed a monopoly on power since 1949, is moving surely toward democracy, Premier Wen Jiabao said on Monday. “China will press ahead with its development of democratic politics, that is reconstruction, in an unswerving way, including direct elections,” Wen told a news conference ahead of an EU-China summit. “If the Chinese people can manage a village, I believe in several years they can manage a township. That would be an evolving system.”

China has introduced direct elections for village chiefs in more than 660,000 villages, and many of those elected are not party members. But it has dragged its feet on expanding suffrage for the election of officials at higher levels. Wen has in the past defended the delay, saying China is a vast, populous, underdeveloped country and levels of education are inadequate. 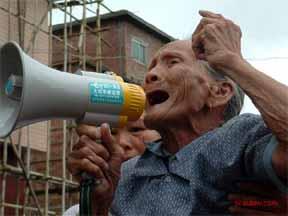 One local village is creating a stir by demanding that the local authorities make financial details more public. During this meeting on July 31, 80-something-old grandmother Feng Zhen got up on a pile of rocks in her bare feet and gave a speech against the many things that village committee director Chen Jinsheng did during his term. Eight or nine other villagers also spoke.

On August 16th, because of unrest and demands on local officials authorities issued an order and the riot police moved in. The female villagers were jostled with shields and poked with truncheons, with many were injured. Five more villagers were arrested. A 16-year-old was hit behind his head and suffered a major concussion. He was also stomped in the chest and a footprint-sized bruise was still visible on his chest weeks afterwards. 80-something-year-old Feng Zhen stood in the way of the police, but they picked her up and threw her by the roadside. She was nearly unconscious and had to be sent to the hospital for care. She sustained a broken bone plus other bruises. 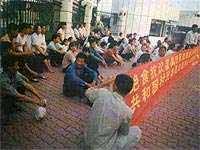 (August 30, 2005) Several dozens of Taishi Village residents held a sit-in at the Panyu government office, while announcing that more than 80 of them are on a hunger strike to protest the decision to deprive them of their legal rights for a recall. The protestors would come from Taishi Village in waves by rotation. 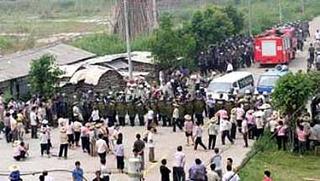 (September 12, 2005) At 9:00 am this morning, the Panyu government mobilized 63 police vehicles and almost 1,000 riot police officers and security personnel to enter Taishi Village and forcibly remove the safe in the budget room and all other financial document in the village committee office. During the process, the police directed high-pressured water hoses on a fire engine at the elderly women who were there to protect the documents, causing several injuries. Forty-eight persons were arrested. 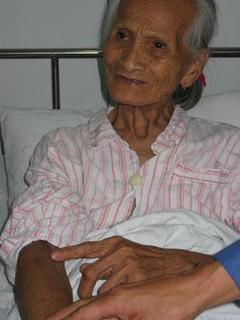 The story of Taishi is just beginning to make it into international news circles. This does not go over well with local authorities who have lost control over their quiet and controlled little village.

A telltale scent of insurrection wafts across parts of rural China, and it’s filling the air of this industrialized Pearl River Delta village.

A red banner suspended over the hall’s entry gate declares, “Remove the village officials. Give our rights back.”

What’s happening in Taishi, population 2,000, might seem like garden-variety social strife. But in China, such local revolts are a bellwether of broader unrest. The fault lines are many, including land disputes, a widening wealth gap, social injustices and rising health-care costs. Emboldened villagers are complaining, occasionally erupting in rampages. While top leaders of China’s one-party state offer some sympathy, they’ve also tightened news censorship and prepared muscular methods to quell revolts.

In Taishi’s case, the unrest has some unusual variants. Villagers are seeking the legal removal of the elected mayor, a new election and an audit of village finances. They say their efforts are lawful and nonviolent.

Even so, tension fills the air. Several organizers of the rebellion say police are looking for them, forcing them underground and on the run. Chinese authorities often have dealt harshly with protest leaders, fearing unrest could spread.

The murder of
Lu Banglie yesterday, may calm things down in this disruptive village or it may promote further insurrection. We will soon find out soon enough, if it is possible to keep the village open to foreigners and the media.

Thanks again to Dog Pundit for the this democracy news from China.

Winds of Change has more on this brutal murder in China.

Rebecca Mackinnon at RConversation has much more on the murder and uprising in Taishi.

Update: (Tuesday PM) Lu Banglie has been found alive. After he was beaten unconscious, he was brought to his home province. He is badly hurt.