Mugabe Begins Operation "Not Going Back"

President Mugabe’s government arrested 14,000 individuals in Harare in what is being called Operation “Not Going Back”. This, of course, follows his famous Operation “Take Out the Trash” earlier in the year where the government left 700,000 homeless in a country of 70% unemployment!

Police have arrested 14,706 in a follow up to this year’s urban slum demolitions:

Police have arrested street people, touts, illegal vendors, illegal foreign currency and fuel dealers who had crept back into Harare’s Central Business District since the launch of Operation Siyapambili/Hatidzokereshure (No Going Back) two weeks ago,” the official Herald newspaper said.

The arrests in Harare follow a two-month nationwide drive to destroy shantytowns which the United Nations estimates left 700,000 urban dwellers without homes or livelihoods or both, and affected another 2.4 million Zimbabweans.

“(The latest drive) aims to make follow-ups to monitor the city so that we deal with any of those who are returning to the city and conducting shady dealings,” police spokesperson Loveless Rupere told the Herald.

In a country with outrageous unemployment the inflation rate remains high and consumer mainstays are hard to come by:

Zimbabwe is grappling its worst economic and political crisis since independence from Britain 25 years ago. Inflation, which reached an all time record high of 622.8 percent in January 2004, has retreated to 265.1 percent but remains one of the highest such rates in the world.

An estimated four million Zimbabweans or a third of the country’s 12 million people face starvation unless about 1.2 million tonnes of food aid is urgently provided.

Critics blame Zimbabwe’s economic meltdown on mismanagement and repression by President Robert Mugabe particularly his controversial seizure of farms from whites that destroyed the mainstay agricultural sector and caused a 60 percent drop in food production.

Mugabe however denies mismanaging Zimbabwe and instead blames the country’s problems on sabotage by Britain and its Western allies opposed to his seizure of land from whites for redistribution to landless blacks. 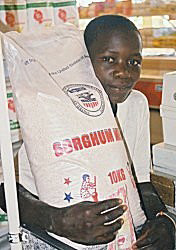 Waiting in line sometimes pays off and sometimes it doesn’t.

Despite the mass shortages of basics in the country and hundreds of thousands without shelter, Mugabe has refused to ask for international aid this year:

Mugabe’s government has refused to appeal for international food aid this year, despite warnings from aid agencies that more than a quarter of the country’s 11.6 million people could face hunger by next March.

In a joint statement, the two agencies said food- and waterborne diseases accounted for some 700 000 deaths in Africa each year – one third of the global death toll from food-related illnesses.

Zimbabwe is facing its fourth consecutive year of food shortages.

The government blames the situation on drought.

It is not unusual to stand in line for 3 hours in a country where everything is in short supply:

To get anywhere near a bottle of cooking oil, a bag of rice, a tube of toothpaste, a carton of milk, a packet of sugar, a box of washing powder or even a bar of soap, you need a reliable rumour, an eye for a queue worth joining and, above all, patience.

This IRIN reporter had heard the night before that maize-meal was on the shelves at a local supermarket, and got there first thing in the morning. Seventy other people were already waiting, and the line looped round the aisles – a shuffling, irritated testimony to Zimbabwe’s economic woes.

Abolish Mugabe has more, including this sad statistic that 60% of the population will not reach the age of 40!

The World Bank also added its comments, by mentioning that Zimbabwe’s downward spiral has never been witnessed by a country that is not war torn. i.e. there is something causing this but not war….hmmm…. A ha! It must be the government!!

Zimbabwean Pundit has reports of a new election in Zimbabwe.