A cache of explosive materials was discovered Sunday night in the apartment of a Wasson High graduate who apparently blew himself up Saturday outside a football stadium packed with 84,000 people at the University of Oklahoma.

Around 7:30 p.m. Saturday night, there was a loud explosion outside Oklahoma Memorial Stadium that was heard as far as five miles away.

Windows at George Lynn Cross Hall, were blown out, which are in the process of being repaired. And, windows to a bus that was parked nearby were also blown out.

Norman Fire Department was called to spray debris and blood off the bus and the surrounding area.

More information is emerging on the Sooner Bomber. 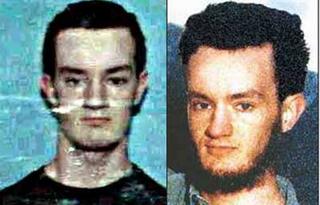 Joel Hinrichs from an earlier picture (left) and recently (right)

Joel Hinrichs father, Joel Hinrichs Jr. said on Sunday that his son had trouble making friends and that he had battled depression.

Hinrichs’ father, Joel Henry Hinrichs Jr., said he is clinging to the idea that his son’s death was unintentional. He said he communicated with his son and nothing seemed out of the ordinary. He said his son was a very intelligent and private individual who somehow lost the confidence that his life would be a good one.

He told The Denver Post that his son had trouble making friends with peers. He said his son took a year off college to try to cope with depression.

Hinrichs’ sister, Berkeley Hinrichs, told the newspaper that her brother said he wasn’t sure what he wanted to do with his life. She also said it’s possible her brother was doing an experiment and did not mean to kill himself.

The university president says it was a lone act of suicide:

Joel Henry Hinrichs III, a 21-year-old junior, was killed when an explosive attached to his body detonated while he sat on a bench across the street from the OU stadium in Norman, Okla., in the second quarter of the Oklahoma-Kansas State game.

The blast was heard throughout the stadium and up to four miles away. No one was allowed out of the stadium for 30 minutes after the explosion, but the game continued.

Sunday afternoon, OU President David Boren said “we are apparently dealing with an individual suicide” and said there was no evidence that Hinrichs planned to harm anyone else. But authorities found numerous explosive materials when they searched his apartment, The Oklahoman newspaper reported in today’s editions.

But the information by President Boren doesn’t add up…

No “normal” person commits suicide by blowing himself up in public with a backpack full of explosives. Suicide bombers with suicide belts do not generally do so in isolation! How does one learn how to make a suicide bomb belt? A person committing suicide does not usually have a cache of explosives stored up just in case. Where does one look to find instructions for making a suicide belt? Are there any other internet sites besides militant Islamic sites where one can learn how to do this? 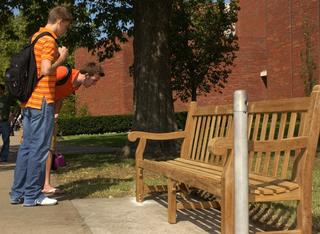 Two University of Oklahoma students look at the new bench outside the George Lynn Cross Hall Monday afternoon. The bench was replaced after the suicide bombing from Saturdy night. (Oklahoma Daily)

“In hindsight, the handwriting was on the wall,” Joel Hinrichs Jr. said of his youngest son. “He was unhappy in his major (mechanical engineering). He had the energy of a young man, but he didn’t have the optimism.

“He lived his life very privately. He was very bright. He was fascinated with technical information and subjects, but evidently did not pick up much confidence on his passage through childhood. He ran out of confidence last night.”

Tom Hinrichs, 24, said his brother was lonely and frustrated.

“I was surprised a bit by the details, but on the whole I was not surprised,” he said. “He’d always been fascinated with artillery.

“He had real demons that were eating at him, and I told him some things I thought he needed to do, but he had such intense pride it didn’t register to him.”

Joel III, who went by “Joe,” was the youngest of three boys and two girls. His father’s job as a software engineer brought the family to Colorado Springs from Illinois, about six years ago. His parents recently separated, and his mother, Elaine, also lives here.

FBI Special Agent Gary Johnson said there is an ongoing and intensive investigation related to Saturday night’s events and would not comment about the events concerning Hinrichs’ apartment complex.

Joel Hinrich’s father is clinging to the idea that the suicide was an accident.