ATTENDEES SAY THE “WORLD WILL SEE THIS IN A POSITIVE LIGHT”(?),
(Maybe if you’re Castro or Hugo Chavez!)
VIDEO HERE

The American Public is once again snookered by the media! 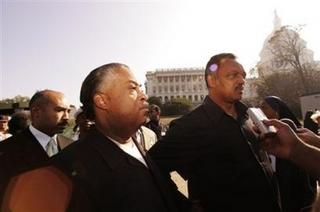 But, once again the American public will be snookered by the media…

Erin Texiera, from the AP shamelessly does not mention any of the deranged communist talk from today!
ABC is spreading the AP’s partial report.

Wow! This guy, Farrakhan, like Castro and Chavez knows how to give a long-winded speech. He just got through urging blacks to take up Castro on his offers.

Next he talked about Mao Tse Tung and what a hero he was, taking the opium addicts and making them upstanding citizens. (I think this could also be called the slave labor camp solution. How many millions did that man kill, anyway?)

He urged a Ministry of Agriculture formation where the black farmers on indian land(?) can sell their goods to the black city folk.

Urging a Ministry of Defense (that’s scary!), Ministry of Information,… but we need money.

This is a dangerous man.

Uh-oh, stop the press, he just suggested to form a “blacks only party” and move away from the Democrats.

That ought to perk a few ears up in the democratic ranks! No, come to think of it, they have nothing to worry about.

Native Americans are demanding land and wealth that is owed them but are weak, but together as a united family we can solve this.

Tony Blair and Great Britain are not giving enough for ruining Africa.

Pope JP II asked for forgiveness, but first you must admit the crime. Acknowlege that you have done evil to the indigenous people of the world and then if the church atones and gives back to the indigenous what they deserve they will be forgiven.

We are ready to forgive if Europe gives back to Africa, and build roads, then ask for forgiveness.

America has been pitiful in this regard. You made OJ Simpson pay even though he was cleared in court. We want more than an apology. We want more than a monument. We want acknowlegement that we fought in all your wars for freedom. Maya Anjelou wrote a poem that said we demand same civil rights for all of America. If we can’t give justice don’t take our tax dollar.

“I think we need regime change in Washington DC.”

This government is destroying unions and workers.

We should “take America back” from the rich and give it to the people if it is really “of the people”… take it back from the land owners, the white males!

Labor leaders get involved in building a new food base(?)

In closing… send a dollar and fast one day a week.
(gives address- just one dollar a week, and don’t forget to fast!)

Michelle Malkin has been following this all day. She deserves much respect.
I relate more to Condi, myself.
Oliver Willis says there needs to be a changing of the guard in black leadership. I agree, more handouts is not what is needed!

Wow! Independent Conservative has a picture that puts things in perspective.