A TRANSPORTATION STRIKE IN FRANCE FOLLOWS A VIOLENT UNION PROTEST IN CORSICA OVER THE WEEKEND,
VIDEO HERE

The French honeymoon may be over with the new Prime Minister Dominique de Villepin who is under pressure to improve a stagnant economy without upsetting the French labor benefits boat in the process. 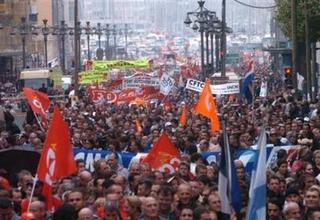 French transit was seriously disrupted today as union workers took to the streets over government policies and complaints of low pay:

The strikers oppose government economic policies, including plans to privatise state firms, and complain that low pay is eroding their purchasing power.

The strike is seen as a big test of new PM Dominique de Villepin’s reform plan.

French media are predicting the action will represent a “Black Tuesday” for the prime minister.

Plans to sell off the SNCM ferry firm have already led to a week of unrest in the southern port of Marseille. 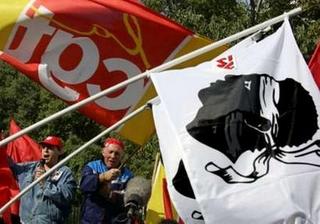 Striking workers shout slogans as they demonstrate during a nationwide one-day strike to protest against the French government, in Bastia on the Corsican island, October 4, 2005. A one-day strike disrupted public transport in France on Tuesday in protest at high unemployment and low purchasing power, putting pressure on the conservative government over its labour and economic policies. (Reuters)

There are signs that this will not be a typical French strike:

All five of France’s labor confederations are taking part. This unanimity among labor organizers and the high levels of support the unions are receiving in opinion polls suggest that the protest will provide a key test of whether Villepin’s government has the courage to stick by the labor policies he introduced in the quiet months of summer.

Villepin already has his hands full. Over the weekend, Corsica was virtually isolated from the European mainland by striking dockers and sailors protesting plans to privatize a state-owned ferry company.

Emergency talks with the dockers began Monday in Marseille but broke up after several hours and are to resume Wednesday.

The government said before the negotiations began that privatization was inevitable, and presumably the jobs cuts that would come with it.

The generalized fear of layoffs in France and the perception of greatly reduced spending power have combined to put a dent in French morale. 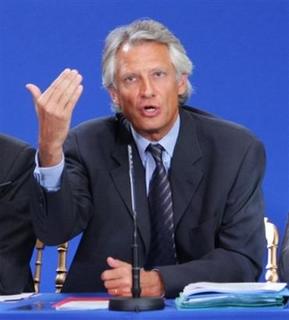 The honeymoon with the new Prime Minister may be coming to an end. French Prime Minister Dominique de Villepin addresses reporters during his monthly meeting with the press, at the Hotel Matignon in Paris. (AP)

French officials have an optimistic view on the French economic future, but critics are not so sure:

Finance Minister Thierry Breton made clear he was sticking to growth targets set out in the 2006 draft budget unveiled last Wednesday, although independent economists say they doubt the government can achieve the targets it has set.

The budget sets out plans to bring the budget deficit below the European Union ceiling of 3.0 percent of gross domestic product for the first time since 2001.

The government also plans to keep a tight rein on spending but is relying on the euro zone’s second largest economy growing by between 2.0 and 2.5 percent in 2006 to increase tax receipts.

Unemployment remains at 9.9 percent of the workforce, according to data released last Friday.

The traditional Franco-German economic motor has been disappointing the rest of the EU with anemic growth for years.

There were violent protests on the French isle of Corsica between union dock workers and officials over the weekend (posted HERE.)

A. M. Mora y Leon at Publius Pundit has more on the troubles in France today.