The casualty toll from the 7.6-magnitude tremor rose sharply Sunday as rescuers struggled to dig people from the wreckage, their work made more difficult as rain and hail turned dirt and debris into sticky muck. Maj. Gen. Shaukat Sultan, Pakistan’s chief army spokesman, told Pakistan’s Geo TV network early Sunday that more than 18,000 had been killed — 17,000 of them in Pakistani Kashmir, where the quake was centered. Some 41,000 people were injured, he said.

Update: (6:00 PM CST) 250 children who perished at one school north of Islamabad in Pakistan. Police chief Riffat Pashar told Reuters 350 altogether had died in the collapse in Mansehra district.”

“Fifty were killed in another school in the same district,” he said. There is no confirmation. 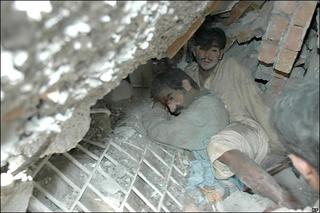 In the capital, Islamabad, a 10-story residential building collapsed. Officials worked into the night, rescuing more than 40 people from the debris, but officials fear many more may still be trapped beneath the rubble. (BBC & VOA)

“The toll included 250 girls who died when their school in northwestern Pakistan collapsed.”

THE BBC HAS VIDEO OF THE RESCUE AT THE COLLAPSED ISLAMABAD APARTMENT BUILDING, HERE 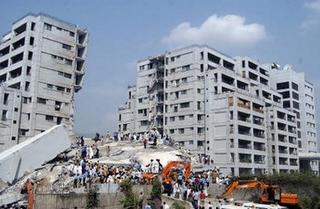 Pakistani rescue workers gather at the site of a building collapsed by an earthquake in the capital Islamabad October 8, 2005. A major earthquake shook cities and villages across the south Asian subcontinent on Saturday, ‘wiping out’ several villages in Pakistan and leaving more than 1,000 people feared dead. (Reuters)

“The death toll could be more than 1,000. There could be massive casualties but we do not have exact numbers,” Sultan said from the capital Islamabad.

In Muzaffarabad, the capital of Pakistan-controlled Kashmir, 50 percent of buildings had either collapsed or been damaged, Sultan said.

A military hospital in Rawalakot in Kashmir had also been damaged and there were some some casualties among army personnel, he added.

At least two people were killed and 32 were injured when an apartment block in the capital Islamabad collapsed, police said, and photographers at the scene said they had seen more bodies being pulled out. 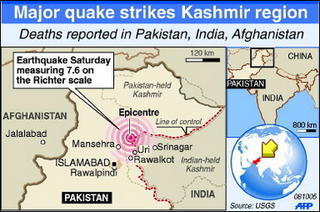 A map of the earthquake affected areas. (AFP)

Musharraf fears more than 1,000 may be dead!

More than 1,000 people might have been killed in a major earthquake that struck northern Pakistan on Saturday, President Pervez Musharraf’s spokesman said.

“Casualties will be high … they could be well over 1,000,” said the spokesman, Major-General Shaukat Sultan.

The earthquake, with a magnitude of 7.6, struck at 0350 GMT and was centered in forest-clad mountains of Pakistani Kashmir, near the Indian border, about 95 km (60 miles) northeast of Islamabad. 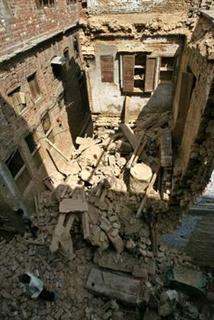 Deaths reported in India and Afghanistan!

“The damage and casualties could be massive and it is a national tragedy,” Sultan told The Associated Press. “The is the worst earthquake in recent times.”

The U.S. Geological Survey said on its Web site the quake hit at 8:50 a.m. local time and had a magnitude of 7.6. It was centered about 60 miles northeast of Islamabad in the forested mountains of Pakistani Kashmir.

A young Pakistani is taken from the wreckage of a collapsed Islamabad apartment building. (BBC) And, Indian Kashmiri women react after experiencing the tremors of a powerful earthquake measuring 7.6 on the Richter scale, in Sopore some 60 kms north of Srinagar. An earthquake measuring at least 7.6 on the Richter Scale caused massive devastation across a swathe of Pakistan, India and Afghanistan, leaving over 1,000 people feared dead. (AFP)

The tremors could be felt from Kabul to the west to New Delhi to the east:

The gravest damage was believed to be in the Northwest Frontier province, in an area called Mansehra, where landslides prompted by the quake “wiped out” entire villages, the Pakistani Interior Minister, Ahmed Aftab Sherpao told a private television station.

The damage was also believed to be extensive across disputed Kashmir. In the Indian-held side of the province, the death toll steadily rose to 175 by early evening, plus 800 wounded, Indian officials said. An unknown number of Indian Army personnel were also believed to
have died. Hundreds of houses were flattened, phone lines and electricity disrupted and several roads blocked due to landslides.

Pakistani authorities estimated the death toll in its portion of Kashmir to be around 250, according to Agence France-Presse.

In Islamabad, panic gripped the entire city and people spilled onto the streets. Traffic jams clogged the roads. Residents huddled in groups outside houses, shopping plazas and government buildings. The mobile phone network collapsed for at least one and a half hours.

The American Mind is carrying the Pakistani story.
UNPartisan is a cool site with more information.
The Jawa Report is reporting on the earthquake.
PunditGuy says that political tensions took a back seat.