Liberia was founded in 1847 by freed African-American slaves. 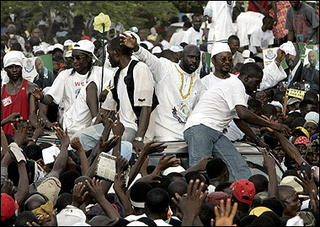 Former football star George Weah, candidate in the Liberian presidential election, waves as he arrives for a rally 08 October 2005 in Monrovia. Liberia’s citizens have stowed their campaign t-shirts and banners ahead of Tuesday’s polls, amid heady political debate and final preparations for the vote aimed to steer the west African country away from war and towards reconciliation and prosperity. (AFP)

Ex-soccer star is expected to have a strong showing:

George Weah, the former footballer, is expected to face a tough challenge from a former finance minister and ex-World Bank employee, Ellen Johnson-Sirleaf.

More than 700 candidates are also chasing 94 seats in the Senate and House of Representatives in the first election since the former Liberian leader, Charles Taylor, was forced to step down two years ago as part of a peace deal, ending the 14-year civil war.

The poll being held under United Nations tutelage is designed to turn a page on Liberia’s bloody history and usher in democracy and peace.

Liberia takes its shot at democracy. 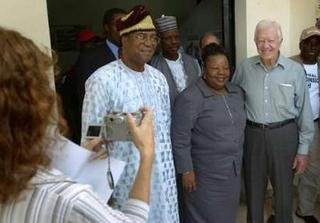 After disastrous results in Ethiopia, Jimmy Carter has moved on to Liberia. Former U.S. president Jimmy Carter (R) and former president of Benin, Nicephore Soglo (L), pause for pictures with Liberia’s National Elections Commission Chairwoman, Frances Johnson-Morris (C), as they depart a meeting at the National Elections Commission in Monrovia, Liberia, October 10, 2005. Carter and Soglo will be leading observers in Liberia’s October 11 election, which is called the first ever fair and free election in the country’s 158-year history. (Reuters)

The former child soldiers many who fought in wigs and dresses raping and killing their way across the country are rooting for soccer star Weah:

Liberians once feared the child soldiers, who often fought in a haze of drugs and alcohol and dressed in women’s clothing and wigs. Now many older or educated Liberians are wary of the voting power of these semiliterate young adults as Weah seeks the presidency in balloting today.

Liberians head to the polls in the first elections since the 2003 ousting of former President Charles Taylor, and Weah appears to have the edge in a field of 22 candidates. His young fans call him “The King.”

To them, the 39-year-old ex-footballer’s limited education and lack of political experience are no problem.

Despite a remarkably calm election campaign, Andrew Johnson, 43, a resident of the Jatondo camp for internally displaced people outside Monrovia, fears a violent reaction from Weah’s supporters if he loses.

“These are children and they’re a real problem,” he said. “They think he can play football and if he becomes president the youth will have a chance. They’re ex-combatants and they’re used to war. They can do anything.”

Analysts see today’s presidential and parliamentary elections not as a panacea for the country’s ills but as a crucial first step if Liberia is to become something other than a failed state looted by corrupt governments and torn apart by warlords who have pillaged its resources. 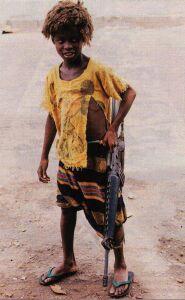 Liberia’s child soldiers often war womens clothes including wigs, bras and undergarments to ward off evil spirits in battle. These children have put down their guns and will be voting today in the Liberian National Election.